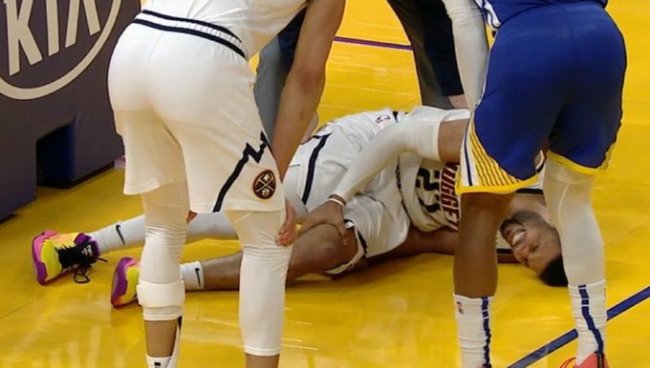 One of the NBA brightest stars suffered what appeared to be a serious injury and fans are putting the blame on commissioner Adam Silver.

During the Warriors-Nuggets game on Monday night, Nuggets’ star Jamal Murray needed help to walk off the court after he went down with an apparent knee injury.

The Murray injury was awful. Michael Malone got to the floor and instantly starting yelling to bench — towels were being taken to the floor to stabilize Murray's head as Nuggets medical staff checked him out. He stayed down for a few minutes and then hopped back to locker room.

Jamal Murray was helped off the court after an apparent knee injury with 50 seconds left against the Warriors. pic.twitter.com/sz7akzOiq4

Jamal Murray turns down the wheelchair but limps to the locker room with Support. pic.twitter.com/fFmSi86jBp

Update: Murray is out for the season with a torn ACL.

Exercise your freedom of speech in a right way, I accept all comments, positive or negative but DEFINITELY NOT RACIST ONES.
Thank you all and love you all💪🏽#StopAsianHate pic.twitter.com/xMaWc59wvt

Fans immediately blamed Silver for Murray’s injury after the Nuggets were forced to play six games in nine nights due to the shortened season.

With so many back to backs in such short turn around time after the bubble it’s obvious why these players keep getting hurt man 😔 Prayers for Jamal Murray… I blame you Adam Silver! you greedy mfer pic.twitter.com/xrcOQbmMfe

Adam Silver gets to pretend he makes tough decisions when he absolutely has not. Can't interfere with Olympics, have to start season when networks tell you to, have to do all star game without an extended break, have to jam 72 games in, have to have to have. Enjoy the season pal https://t.co/QCVroNqD5W

Adam Silver while season ending injuries are at an all time high because of a shortened offseason pic.twitter.com/ia0o8VB2fV

6 NBA games in 9 days is ridiculous bruh. Adam Silver shouldn’t even think about heaven when the time comes

Jokes aside Adam Silver overworking them boys. They need to take a stand