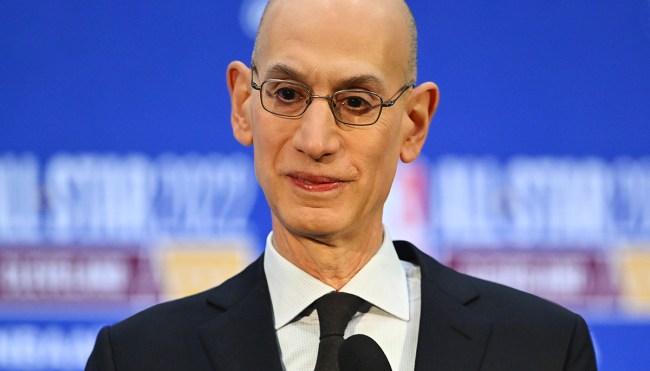 The Golden State Warriors have seemingly attempted to paint themselves as a ragtag group of scrappy underdogs over the course of the NBA season. However, it would appear the team—which won three titles over the course of five consecutive NBA Finals appearances before missing the playoffs the past couple of years—has failed to cement that narrative after returning to championship contention once again.

On Tuesday night, the Celtics pulled out to a 2-1 lead in their Finals showdown thanks in no small part to the abysmal efforts of Draymond Green, who was treated to the “F—k You Draymond” chant that echoed around TD Garden after he fouled out with around four minutes remaining in the contest.

That did not sit well with a number of people who were apparently under the impression that was the first time fans have ever sworn in unison at an NBA game.

After the final whistle blew, Klay Thompson, Steve Kerr, and Green’s wife Hazel Renee were just a few of the pearl-clutchers who played some variation of the “How classy” card in response to the chant. We were also treated to a report concerning multiple Warriors employees who’ve complained about being subjected to hostile treatment for wearing team apparel on the streets of Boston as if they were expected some other end result.

On Thursday, WCVB‘s Peter Eliopoulos got the chance to ask NBA commissioner Adam Silver about the overblown controversy. The league’s head honcho acknowledged it’d be nice if fans treated players with more respect, but he made it pretty clear he didn’t share Golden State’s disdain for their choice of words while completing the “energy Boston fans brought.”

"I love the energy Boston fans bring to the game," #NBA Commissioner Adam Silver says in response to the Garden crowd screaming F– You Draymond [Green]. “I want fans to enjoy themselves, of course from the league office you want to see it done with respect, but I get it." #wcvb pic.twitter.com/pNok8CaBFU

It’s hard to be too shocked by this. During his tenure, Silver has earned a reputation as one of the more reasonable commissioners in sports (although the bar isn’t exactly set too high), and at the end of the day, he’s a businessman who knows the NBA is a business, man.

Silver is more than aware bad blood sells—and based on how things have unfolded so far, it seems like there’s a very good chance we’re going to be treated to much more of it by the time the NBA Finals wrap up.