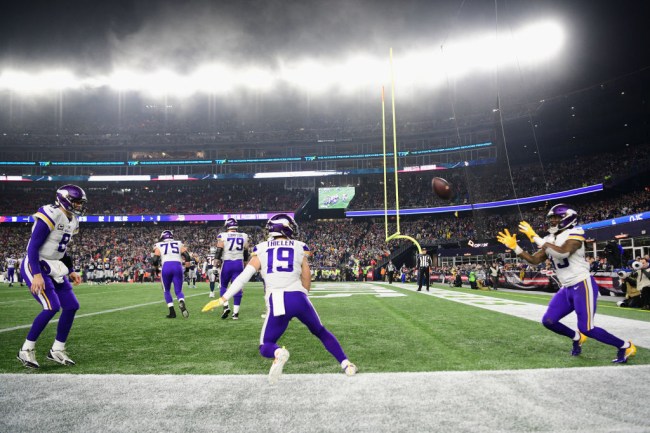 Vikings star wide receiver Adam Theilen had one of his least productive games of the season on Sunday in a 24-10 loss to the New England Patriots. The 28-year-old Pro Bowler caught five balls for just 28 yards, marking his second-lowest yardage total all season (Thielen had 22 receiving yards in a Week 9 win over Detroit).

Ladies and gentlemen, I present to you: a game of pickle. Or something.

Did Adam Thielen mimic a pickle in baseball for his celebration? pic.twitter.com/0q1hD8hKOx

A few problems with this celebration:

1.) It’s played out.
2.) Dalvin Cook has obviously never played pickle in his life. That’s not how you throw a baseball.
3.) Thielen touched the ball, and as a baserunner, would be called out.
4.) I’ve spent more time studying for a pass/fail test in Theater class than these three did concocting this abomination.

One of the worst TD celebrations of the season, right? Proper preparation prevents poor performance, guys.

Thielen’s touchdown should only count for 5 points after that bomb of a celebration.

Thielen botched that hotbox/pickle celebration so badly the touchdown should be called back.

Cook had no clue about this celebration, also why did Thielen touch the "baseball"? Also, why did it die so fast? So many questions… https://t.co/6u3LrYRrNJ

Adam Thielen with the dumbest TD celebration of all time. #EpicFail pic.twitter.com/p37jadJToL

In Adam’s defense, when you have nine touchdowns on the season, you start to run out of good ideas.