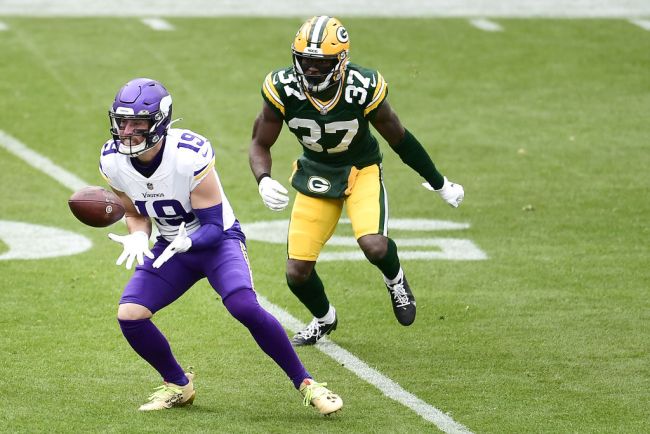 Adam Thielen single-handedly lit a fire under each and every Green Bay Packers fan over the weekend after making some rather bold statements about Lambeau Field.

During his recent guest appearance on GOLF’s Subpar podcast, Thielen said that there was “nothing fancy” about Lambeau Field, the “whole stadium is not nice,” and all it is is bleacher seats.

I’ve never step foot in the state of Wisconsin let alone Lambeau Field, but I do have eyes and a brain and I can confirm that there’s nothing fancy about the place. Having said that, nobody is saying Lambeau should be fancy, in fact, that’s the exact opposite of what Lambeau Field is. The simplicity and old-school feel of Lambeau is what makes Lambeau, Lambeau.

Thielen also didn’t say the place wasn’t special, in fact, him saying that “there’s nothing better than leaving Lambeau after a victory” shows how much he respects the place.

It’s pretty clear that Thielen didn’t intentionally mean to ruffle any feathers, plus he didn’t really lie about anything, but Packers fans were still fired up over his comments. The Vikings’ tight end joined The Pat McAfee Show on Monday and gave a little more context as to where exactly his comments about Lambeau Field came from.

After McAfee hilariously recaps what Thielen said about Lambeau, Thielen himself explained that he told his wife that his comments were getting shared all over the place and she immediately responded by saying Lambeau Field is the best. He then sort of walked back his comments hitting all the buzzwords like ‘history’ and ‘tradition.’

"I'm not here to defend myself but I do want to put a little context on this. I said it is 1 of my favorite places to play" #PatMcAfeeShowLIVE pic.twitter.com/NmbISAPjmq

Since Thielen signed with Minnesota in 2013, the Vikings have gone 3-3-1 in their seven trips to Lambeau Field.