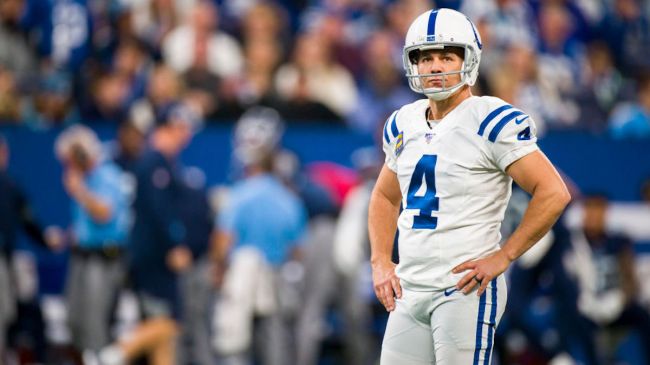 Former NFL kicker Adam Vinatieri, who concluded his 23-year NFL career back in 2019, took to Twitter to show off his new physique, which has the potential future Hall of Famer looking like a lineman.

Vinatieri, who won four Super Bowls during his time with the New England Patriots (1996-2005) and Indianapolis Colts (2006-2019), captioned the post by asking if “this is how 50 is supposed to look?” As for the other person in the video, that’s likely Adam’s son AJ, who is also a kicker.

Is this how 50 is supposed to look?! #dadbod pic.twitter.com/ntzE4TPjAw

Currently, there are just four kickers (and two “pure” kickers) in the Pro Football Hall of Fame: Morten Andersen, Jan Stenerud, George Blanda (who also, more famously, played quarterback), and Lou Groza. Vinatieri, who retired following the 2019 season and will be eligible for the Hall of Fame in 2025, is the position’s best chance to add a member to the Hall of Fame in decades.

As a Premier League fan, Vinatieri’s transformation reminds me of Fernando Torres, the former Liverpool, Chelsea, and Atletico Madrid striker. Following a playing career that saw him sport a wiry frame, Torres — who also retired in 2019 and is now 38 years old has since spent retirement also getting yolked.