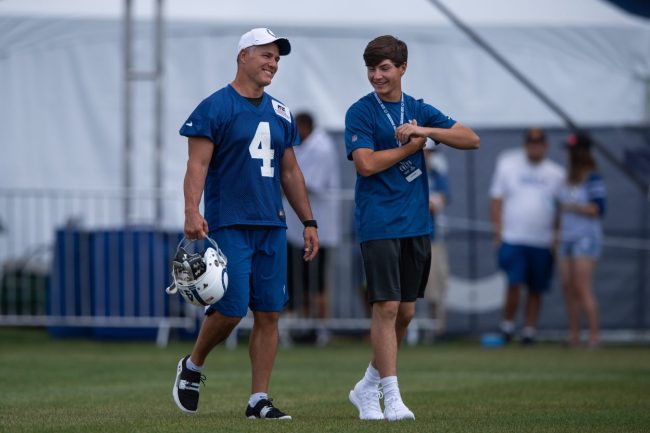 When Adam Vinatieri retired from football in 2019, he left the game as the NFL’s all-time leading scorer with 2,673 points. The 49-year-old is no longer kicking, but his legacy is living on through his son AJ.

Living in Zionsville, a suburb of Indianapolis, AJ is not just his father’s son. He is his own person and is carving his own path.

However, obviously, he and his dad have a lot of similarities.

AJ Vinatieri is quickly becoming one of the top kickers in the nation, earning five-star recruit status. He, like his dad, stands 6-foot-0 and hovers around 180 pounds.

AJ also has a killer leg. He can boot the ball with the best of them as a punter.

He can also do it all in that regard.

And he can drain field goals just like his soon-to-be Hall of Fame patriarch. It’s hard not to be a good kicker when your 23-year NFL veteran dad is teaching you the ropes.

With National Signing Day quickly approaching, AJ is set to commit as a part of the Class of 2022. He has preferred walk-on offers from Michigan, Miami, Marshall, Florida and Indiana, among others.

In truth, AJ could go anywhere that he wants, so long as that school has an opening. Who wouldn’t want to sign the heir to the Vinatieri throne?

Although it is unclear where he will end up, AJ received an offer from his father’s alma mater, South Dakota State, on Thursday. He also had LSU jump in on his recruitment on Friday.

Honored and blessed to receive an offer to LSU! Thank you @BrianPolian and all the coaching staff for this unbelievable opportunity! Geaux Tigers! pic.twitter.com/8y8ZEefTRR

This marked his first offer out of the SEC West, and based on the recent influx of reported offers, it will not be his last offer before signing day. I guess we will find out on February 2nd.