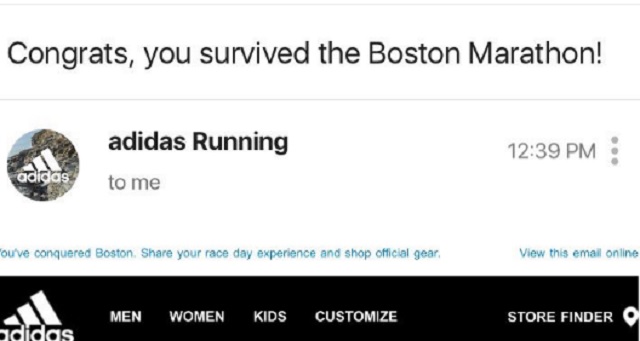 Another day, another PR disaster for a huge corporation. After United and Pepsi drew the ire of the Internet last week, Adidas managed to also piss everyone off with this email congratulating runners for “surviving” the Boston Marathon.

.@adidas you may want to rethink the subject line pic.twitter.com/curUb8FieO

This is obviously a poor choice of words considering the Boston Marathon was targeted by a terrorist attack back in 2013 that killed six people and injured hundreds.

Hey @adidas, not the best choice of words for subjects for email blasts to your members, you think? #BostonMarathon #BostonStrong #changeit pic.twitter.com/ucRLiYy3pR

Adidas is going to have to fire whoever was in charge of writing this email 😵 pic.twitter.com/AmuqdX4vXi