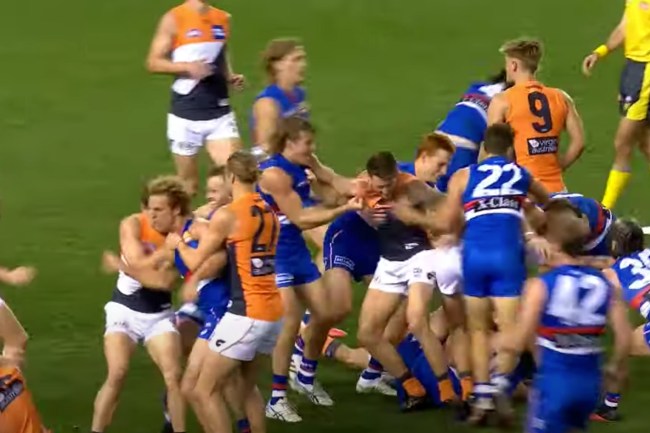 We’ve had fighting as a sport back for a few weeks already but fighting in a sport just hits differently, doesn’t it?

For reasons unbeknownst to me, I’ve never been able to fully get into MMA as a sport. My hunch is because the fights are always on late at night and I was always either out at the bar or I was asleep. I’ll watch a UFC fight every now and then but it’s just not something I go out of my way to watch.

Conversely, if I see mention of an epic fight highlight that took place in any other sport you best believe I’m stopping to watch it. Furthermore, some of the most memorable moments I’ve seen in person were fights. Watching the Red Sox-Rays benches clear and both teams engage in an all-out brawl stands out in my memory as does a 1-punch K.O. during a Dallas Stars game back in 2003, the latter was the #1 SportsCenter highlight of the week that week.

Well, the AFL (Australian Football League) is back and the heated rivalry between the Western Bulldogs and GWS Giants, two teams I’ve definitely heard of before today, was on display as they engaged in a heated brawl with punches wildly thrown in every direction. The Twitter clip shows just the fight and the YouTube clip shows full-game highlights but I’ve set that video to start at 3:55 which is right around when the fight started:

Tom Liberatore kicked a goal after the three-quarter time siren as the Dogs and Giants got heated again.#AFLDogsGiants pic.twitter.com/jNqVDe44Xt

The Western Bulldogs went on to win the game 57-33 in full time which is a score that probably makes sense in however they score Australian Football but one I’m not sure I’ve ever seen in the NFL or College Football.

It’s just nice to have some pro sports back as a distraction, isn’t it? My Tottenham Hotspur lilywhites are back in Premier League action today against Manchester United. The Spurs host Man U. at their new stadium in North London which will be empty but the game’s going to be a screamer. I’m not overly optimistic that my team will walk away victorious but pessimism is part of being a Spurs fan, right?