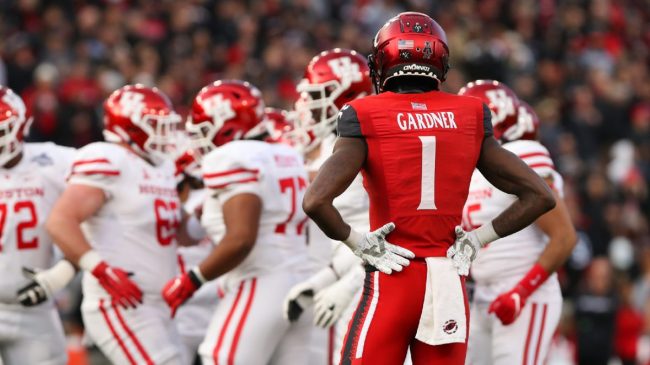 One of the best parts about the NFL Draft is seeing the outfits donned by each player as they walk across the stage to meet with commissioner Roger Goodell.

Ahmad “Sauce” Gardner is one of those players, and he’s ready to hear his name called in tonight’s event so he, too, can stroll up to the podium with the NFL world watching.

He shouldn’t have to wait too long to do so. The All-American cornerback is projected to be a top 10 selection, with many mock drafts seeing him go as high as No. 3 to the Houston Texans.

He’s certainly earned that status, too. Gardner racked up nine interceptions over his three-year career at Cincinnati, helping the Bearcats to become the first Group of Five program to ever reach the College Football Playoff.

Gardner chose to forego his final season of eligibility in order to pursue a professional career, and he’s already turning heads before even getting started.

The talented pass defender was spotted decked out in his pre-draft get-up, sporting a fitted cool blue suit. But it was another accessory that had folks talking.

“You can never have too much sauce.”@iamSauceGardner is ready 😎

Gardner, whose nickname is Sauce, was seen donning a of diamond chain ahead of the draft day festivities.

“You can never have too much sauce.”

He’s already picking up momentum as the best dressed player in tonight’s draft. With the multimillion-dollar contract he’ll be signing in just a few days, you can bet there will be more to come.

We’ll keep an eye on Gardner as the NFL selections roll in. One thing is for sure, no one will miss him when his name is called.