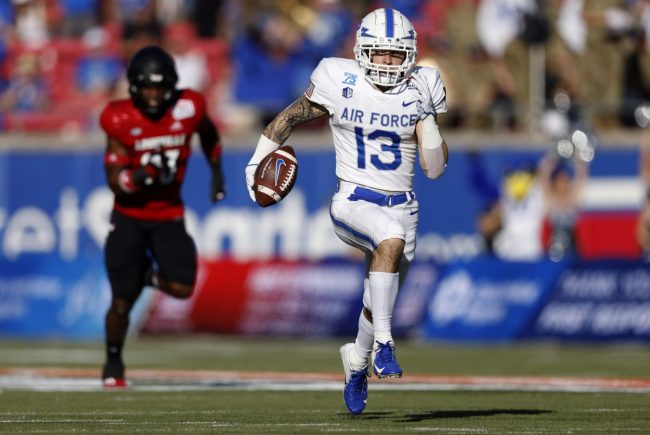 Air Force football, like all of the military academies, is not known for its prolific passing attack. The Falcons run primarily out of the Veer/triple option formation, but throw it around a little bit more than Army or Navy.

With that being said, they came out slinging the pill on Tuesday.

During the first half of the First Responder Bowl against Louisville, Air Force threw the ball seven times for 199 yards and two touchdowns. As a result, the Falcons took a 28-14 lead into the locker room.

One of the two passing touchdowns came as a result of two extremely nasty cutbacks.

With just under six minutes left in the second quarter, Air Force faced 3rd-and-10 from its own 36-yard-line. Instead of handing the ball off with hopes of gaining 7/8 yards and making a manageable fourth down conversion attempt, head coach Troy Calhoun and offensive coordinator Mike Thiessen dialed up a deep ball.

Quarterback Haaziq Daniels dropped back in the pocket, looked over the middle and connected with wide receiver Brandon Lewis. Lewis caught the ball around the Cardinals’ 40-yard-line with two defenders in hot pursuit.

He cutback inside the 25 and shook the first one, sending him to the turf. Then, around the 15, Lewis threw a disgusting stutter-step to fake left and cut back to the right for six. The defender, who was left in the dust, went sliding feet first and hit the ground.

It was a filthy run-after-catch from start to finish, take a look:

Because it was the Air Force, it immediately drew comparison to Top Gun, even though it was the wrong branch— because Top Gun is the Navy.

In the movie, a foreign fighter jet locks onto Maverick and Merlin. To shake the enemy, Maverick “hits the brakes” and the foreign jet “flies right by.”

That was exactly what Lewis did to the two Louisville defenders. So nasty.