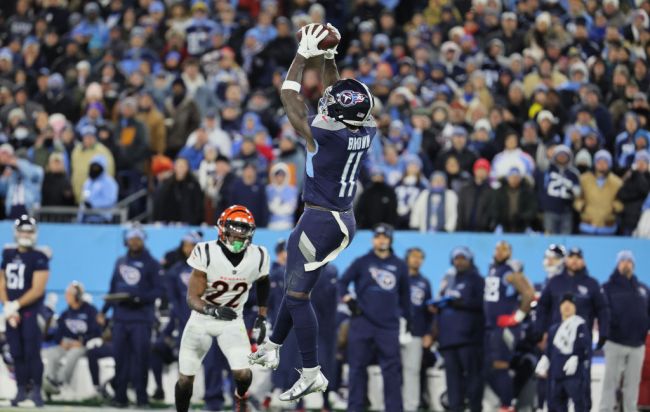 This NFL offseason has football fans on high alert right now. With the way recent events have played out, there is absolutely no telling when your favorite player could be wearing another team’s uniform.

This has become especially true for wide receivers after Davante Adams and Tyreek Hill were traded. It has fans wondering what receiver might be next after those two seemed to open up the possibility of teams trading their top receiver.

It’s that seeming shift that has fans concerned about a tweet they saw today. The tweet came from Tennessee Titans receiver AJ Brown.

It’s out of my hands. God I trust you!

Brown is heading into the 4th year of his rookie deal and could already be looking for a big contract extension or to head to a team with a less run-heavy offense. Whatever the reasoning may be, it has Titans fans speculating about an impending trade.

If AJ Brown actually is on the move, the question becomes where he could wind up. The popular theory among fans is that the Jets could make a move for Brown after nearly landing Tyreek Hill and ultimately coming up short. A move to the Jets would give Brown the chance to line up alongside college teammate Elijah Moore.

An option out there that might be a bit more far-fetched is the Green Bay Packers. Their receiver group is in rough shape after trading Davante Adams and losing Marquez Valdes-Scantling in free agency. They secured some solid draft capital in the Adams deal and could use it to secure a younger, cheaper replacement.

Another NFC team in the market for a receiver upgrade and with the draft capital to make a move is the Philadelphia Eagles. Picking Devonta Smith last season looks like a move that is going to pay off, but besides him and Dallas Goedert, Jalen Hurts doesn’t have the best options to work with in the passing game.

Of course, this tweet could have absolutely nothing to with a trade, but if it does then this would be another major shakeup in the NFL landscape.