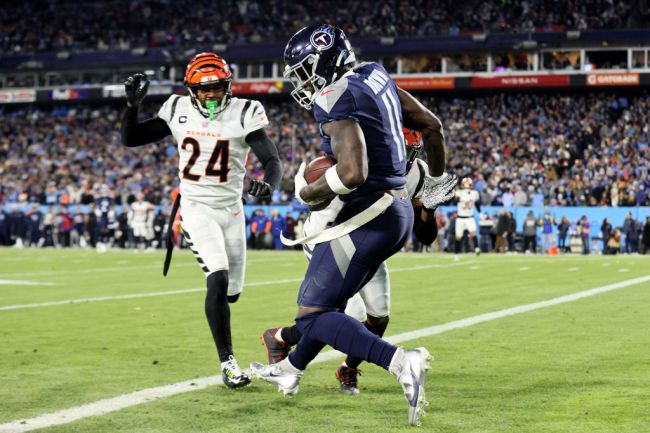 AJ Brown’s contract negotiation with the Tennessee Titans has taken another interesting turn.

Just yesterday, it was revealed that Brown would be skipping the team’s voluntary offseason workouts as he tries to get a new deal from the team before the start of the last year of his rookie contract.

That led to enough criticism from fans for him to take to Twitter to call out those who believe he is a bad teammate.

Now, his Twitter account has added another interesting wrinkle to the story. Last night, the Tennessean’s Ben Arthur noticed something missing from Brown’s account. According to Arthur, Brown has removed “TENNESSEE” from his Twitter bio.

For as long as I can remember, “TENNESSEE” was in A.J. Brown’s Twitter bio. That has been removed … #Titans pic.twitter.com/kBWsf8MZJy

There’s no way to know whether or not this was some kind of negotiating tactic by Brown, but I certainly hope it was. Brown currently holds all of the power in this negotiation and he should do whatever he can to exploit his situation.

Brown is the star if the Titans’ passing game and will be relied on more than ever next season. He also only has one season left before he can leave the team without them getting anything in return.

This offseason has even proven that Brown could potentially force a trade if he really wanted to. Davante Adams and Tyreek Hill have set a precedent that is only going to help other wide receivers get the money they want in the future. At this point, the Titans need to just give Brown what he wants as quickly as possible and get him back to working with the team.

It seems the Titans have waited too long to strike a deal with their top receiver and are now going to need to give Brown a contract in line with the huge deals being given to the league’s best receivers if they want to hold onto him.