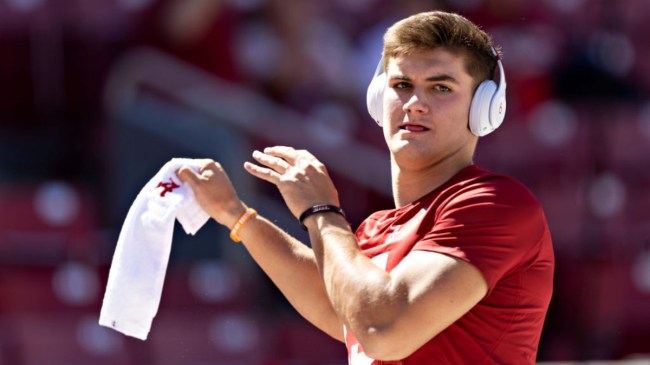 To the surprise of just about nobody, Alabama’s football program has worked their way to a 6-0 record. However, that unblemished record hasn’t been without its challenges.

The Crimson Tide barely made it out of Austin with a win over the Texas Longhorns in Week 2. 3 weeks later, they were hit with an even bigger problem. Starting quarterback Bryce Young suffered a shoulder injury in the team’s win over Arkansas.

He hasn’t played since, missing a large chunk of that game and then the following game against Texas A&M.

Jalen Milroe has been the man under center for Alabama since the injury and has led them to a pair of wins in that time. However, last week’s win wasn’t pretty. Milroe threw for just 111 yards in the game and Alabama only beat Texas A&M by 4 at home.

Following the game, some fans have wondered if Bama might have a better option if Bryce Young isn’t able to go against Tennessee.

To make matters worse, it seems that the team’s 3rd string quarterback has been liking tweets saying that he should start if Young is unavailable.

Uh oh trouble in paradise. Simpson not supporting his teammate Milroe? Hate to see it pic.twitter.com/HzFcLnr7kg

Nick Saban is surely not going to be too happy about this and it’s a change he’s probably not going to be making this weekend. Milroe hasn’t been the most impressive in his couple of opportunities, but he has been able to do the only thing Nick Saban cares about. He’s been winning football games.

There’s also no way to know for sure that Simpson would be an improvement.

Really, Alabama and their fans just need to be hoping that they get Young back for this big SEC matchup.