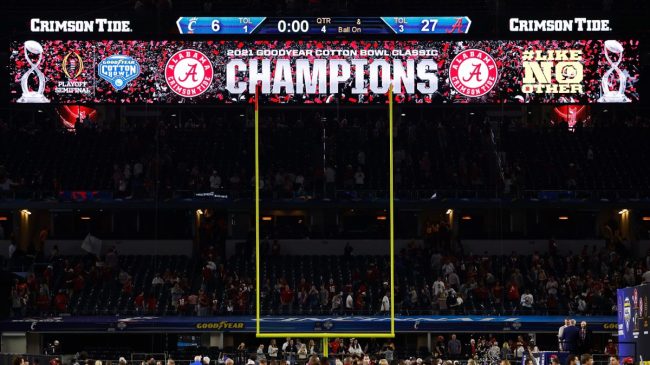 The Alabama football team landed a huge recruiting victory last week when they landed the commitment of four-star quarterback Eli Holstein. Holstein, a native of Louisiana, chose the Tide over an offer from the hometown LSU Tigers.

While the pledge might put Nick Saban and Co. out of the running for top overall recruit Arch Manning, it certainly gives them a building block for the future under center. Holstein is a top 100 player that should continue a trend of Alabama signal callers producing college football championships.

One thing that comes along with recruiting in today’s NCAA landscape is NIL.

A number of sites track approximate valuations for both current players and recruits, but On3 recruiting seems to be the most prominent. How they calculate these totals isn’t a perfect science, but it does lend insight to just how valuable a particular player can be at any certain point in time.

The On3 NIL Valuation is the industry’s leading index that sets the standard market NIL value for high school and college-level athletes.

A proprietary algorithm, the On3 NIL Valuation does not act as a tracker of the value of NIL deals an athlete has completed to date. It rather signifies an athlete’s value at a specific moment in time.

The On3 NIL Valuation is comprised of many dynamic data points that focus on three primary categories:

Holstein’s value is as high as it’s ever been following his commitment to Alabama.

Eli Holstein's On3 NIL Valuation has nearly increased by $50,000 since his commitment to Alabama last week📈

Prior to Holstein’s commitment, his valuation sat at a respectable $395K. That number comes from a combination of social media presence, on-field performance, and exposure to potential endorsement opportunities. With Holstein being a top 100 prospect playing at the most important and publicized position on the field, it shouldn’t come as a surprise.

But his pledge to the Crimson Tide has made him an even more valuable prospect. His NIL valuation shot up to $444K in just a week. The potential impact on name, image, and likeness opportunities will certainly play a part in recruiting from here on out. And players will now begin to look at which schools can provide the best partnerships before making their commitments.