Alabama Signed The Best Recruiting Class Of All-Time, Because They Didn’t Have Enough Talent Before 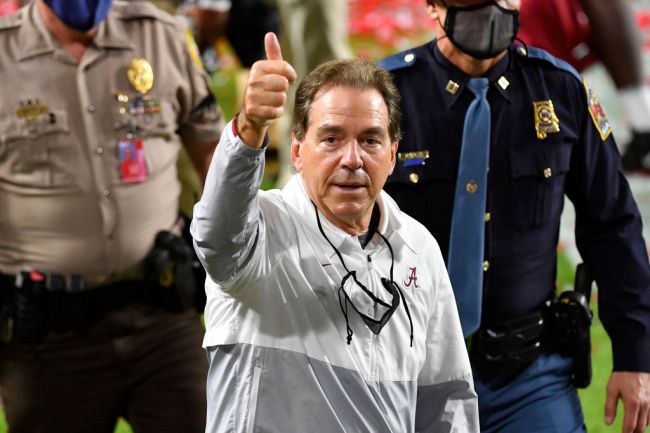 Just when you thought that Alabama football couldn’t get any better, it did. Head coach Nick Saban and the Crimson Tide signed the No. 1 recruiting class in college football on Wednesday, mark the ninth time in the last 11 years that they finished with the nation’s top class. This is nothing new for the program, which is coming off of a 13-0 season that ended with a College Football Playoff National Championship win and a Heisman Trophy winner.

What’s different about this class, however, is just how good it is. Per 247Sports, Alabama’s 2021 signees make up the highest-rated recruiting class of all time. With a composite team ranking score of 325.46, the Tide beat out the 2010 Florida Gators’ score of 324.67 and dominated 2021’s second-highest total of 309.46, held by the Ohio State Buckeyes.

Alabama’s 26 signees include seven 5-star prospects and 15 4-star prospects, and 14 of the top 90 players in the country. That consists of the top two offensive tackles, four of the top 10 wide receivers, the No. 2-ranked running back, No. 1 cornerback, No. 1 weak-side defensive end, and No. 3 and No. 9 linebackers. If that wasn’t enough, Saban and co. are still in play for another four-star receiver, another five-star defensive back and the nation’s No. 1 overall player.

Here is how the class has shaped out thus far:

Recruiting is not a guaranteed track to success, but getting the best players in the country to play for your team year-in and year-out certainly helps. To put Saban’s dominance into perspective, the 2021 class gives him six of the top 10 recruiting classes of all-time to go with his six national championships in Tuscaloosa. The game’s greatest coach continues to reload.