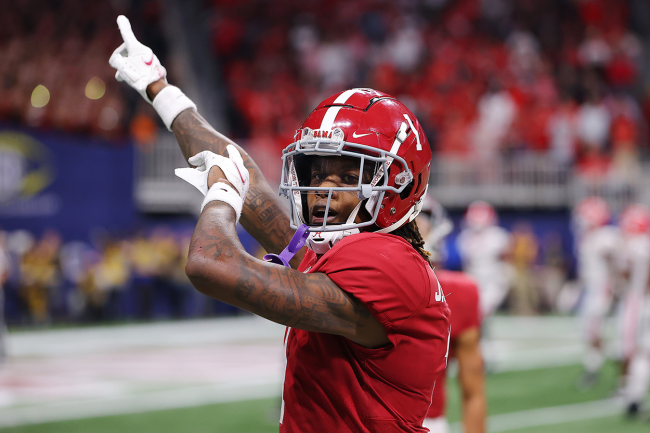 Alabama’s Jameson Williams was considered the favorite to win the 2021 Fred Biletnikoff Award but did not win. The award, given to the college football season’s outstanding FBS receiver regardless of position, is decided by the Tallahassee Quarterback Club Foundation.

Pittsburgh’s Jordan Addison was named this year’s winner on Thursday. With one game remaining in the season, he is currently leading the nation in touchdown catches with 17 and is third in receiving yards with 1,479.

Williams, who transferred to Alabama from Ohio State before the 2021 season, quickly became Heisman Trophy finalist Bryce Young’s favorite target. He has racked up 1,445 yards and 15 touchdowns on the season.

While his numbers are less than Addison’s, Williams recorded 25 less catches. And most of his production came during the last six games.

Over the course of that timeframe, Williams made 39 catches for 858 yards and nine touchdowns. In the SEC Championship Game against Georgia, he made seven catches for 184 yards and two scores.

It was essentially a lock for him to win. But, despite the end-of-season push, it was not enough for Williams to become the Crimson Tide’s fourth receiver to win the award.

He and the internet did not agree with the decision.

Williams, in turn, had a hilarious reaction. he started by posting a photo of his head coach, Nick Saban, looking confused. He then followed it up with two notable and hilarious memes.

Williams was not the only one who did not understand the decision.

Jameson Williams is the BEST WR in college football. Idk how many times I have to say this#RollTide #JamoGotRobbed pic.twitter.com/NiwLubqR9P

Will Anderson and Jameson Williams were robbed so bad, we might see these guys show up versus Cincinnati pic.twitter.com/noMuu5dbUS

Bama fatigue so real bruh. They hate us because they ain’t us!

@TQB_Club How do you guys screw up an award so bad?! Jameson Williams was the clear winner! You guys suck!

Will Anderson and Jameson Williams getting fully disrespected tonight.

Would hate to be Cincinnati.

Again so we not giving even the Biletnikoff to Jamo either tonight wow the disrespect is real. No one can tell me Jordan Addison is better than Jameson Williams smh

Jameson Williams the best WR in college. He should of won that award.

Williams, a junior, would have one season left to prove to the QB Club that he is the best at his position. However, after his explosive end to the season, he is likely to be an early first round pick in 2021, if not the first wide receiver off of the board.

Take a look at Williams’ highlights and decide for yourself whether he was robbed. He certainly thinks he was.