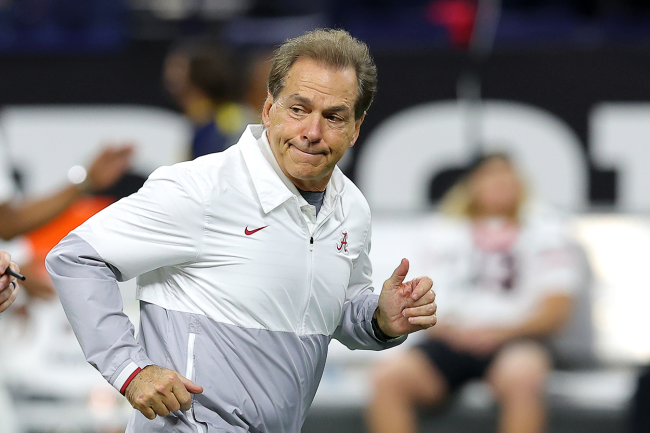 Alabama landed another blue chip commitment on Sunday night. That part is no surprise to anyone.

Who it was, however, has sent shockwaves across the entire country and even into Tuscaloosa.

Justice Haynes is a four-star running back in the Class of 2023 and the fourth-ranked player at his position per On3 Sports. He hails from Roswell, Georgia, about an hour and 30 minutes west of the University of Georgia.

By all accounts, Haynes was set to be a Bulldog. He is an in-state player at a position that UGA has historically recruited and developed well. Nick Chubb, Knowshon Moreno, Sony Michel and Todd Gurley are just a few recent examples.

His own father is another. Verron Haynes played running back at Georgia and was drafted by the Pittsburgh Steelers in 2002.

Throughout the entire recruitment process, Haynes was trending heavily in favor of the Bulldogs. He continuously said all of the right things and made it very clear that he loved everything that was happening in and around Athens, especially after winning the national championship in January.

But then Haynes committed to Alabama.

His father made it very clear that, of course, he is going to support his son.

Every man has their path 2 walk & I’m proud of U for choosin your own. I know the process may have been long & difficult but at the end I’m confident U made the best decision for U. Here’s to your future and all you’ll become. 🍻To the next level. To be continued.. Roll Tide! https://t.co/AkOZfKDPhD

Even still, it was a huge shock for Justice Haynes to commit to play for the Crimson Tide.

It was a virtual lock that he would end up committing to play for the Bulldogs— until it wasn’t.

The decision was so unexpected that even Alabama’s running backs coach and Nick Saban, who has flipped countless recruits before, were surprised.

“Coach Gillespie was like, ‘Wow.’ I think a lot of them thought Georgia. Saban said a thing, he said, ‘That just made my day, to be honest. I did not expect that.’”

Georgia will not stop recruiting Haynes. He has not signed the dotted line. His recruitment is not final.

However, it seems like Alabama pulled off one of the biggest flips in recent college football history. The rich get richer!