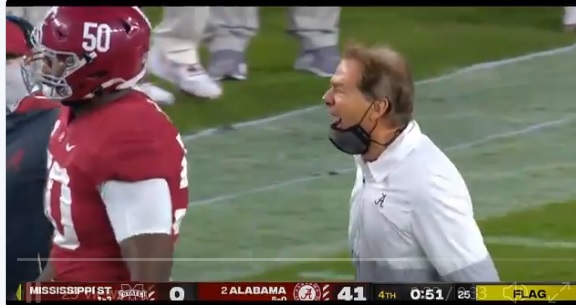 Saturday was Nick Saban’s 69th birthday and his team crushed Miss State 41-O but he still wasn’t happy with everyone’s performance on his team.

Late in the fourth quarter while up 41 points, an angry Saban chewed out freshman defensive lineman Tim Smith for committing an offside penalty in a meaningless play.

Bama up by 41 points and Saban is yelling at one of the players who was offside. Penalties matter…no matter what🤣

After the game, Saban spoke to the media and said he was still critical of his team for getting too many penalties despite winning 41-0.

Nick Saban gets a shutout win over Mississippi State on his 69th birthday, but he is not happy about the 10 penalties. This will be addressed at practice.