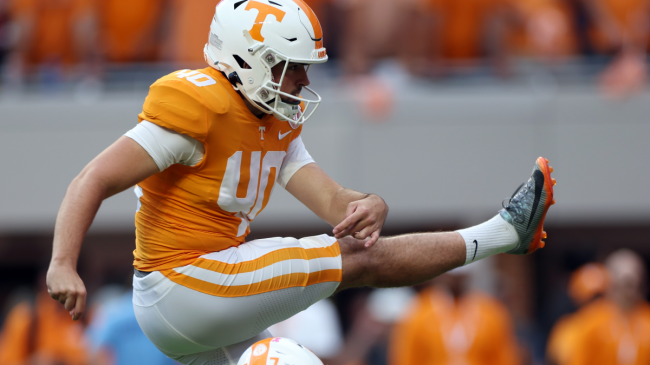 The Alabama Crimson Tide and Tennessee Volunteers played an absolute classic on Saturday in the Vols’ 52-49 victory. The game was back and forth, eventually coming down to a game-winning field goal as time expired.

And a new video shows just how close we came from overtime.

Tennessee jumped out to a 28-10 lead in Knoxville, using a high-powered offensive attack to stun the Tide. Alabama settled in, though, soon overcoming the early deficit to take a 35-34 lead.

The two hated foes traded blows in the fourth quarter, setting up the dramatics for the final drive. With the score tied at 49-49, the Vols trotted out kicker Chae McGrath for the last play.

His 40-yard field goal (barely) got up over the Alabama defensive line, knuckling its way through the uprights. After a second look, it appears that a Bama player may have influenced the ball’s trajectory.

New slo-mo video appears to show an Alabama player tipping the ball, changing the direction of the kick ever so slightly.

Many are saying the ball looked to be headed wide left, but the tip helped get it on a path to the middle of the uprights.

It's a game of inches… pic.twitter.com/FJaodWtkTj

College football analyst Cole Cubelic posted the slowed down, zoomed in clip, and it definitely appears that the ball was tipped. You can see the spin on the ball change, while it looks like the trajectory is pushed slightly to the right.

The player that tipped the ball, No. 47 Byron Young, reacts as though he thought he’d gotten just enough to keep it from sailing through the goalposts. Even the Tennessee kicker wasn’t sure if the ball was going through.

Fans quickly reacted to the exciting ending between the Vols and Alabama.

Obviously, there’s no way to definitively say that the kick would’ve gone wide had the ball not been touched, but that hasn’t stopped fans from posting reactions on social media.

One person wrote, “You gotta think, ‘That ball going in if he doesn’t tip it?'” while another Twitter user commented, “It looks like it was gonna miss to our right and the tip actually straightened it out.”

This fan’s reply summed up the play perfectly. “This actually looks like he was going to MISS the kick and the Bama player altered the trajectory to the point that it went through. That’s even funnier.”

This actually looks like he was going to MISS the kick and the Bama player altered the trajectory to the point that it went through. That's even funnier. https://t.co/XB8t9hNXW7

This has to make the sting that much worse for Bama fans, knowing that they were just inches from sending the game to overtime. After the kick sailed through, the Tennessee faithful ripped out those goalposts and escorted them to the river outside the stadium. The Vols landed their first win over Alabama in 15 years.

What a way to do it.