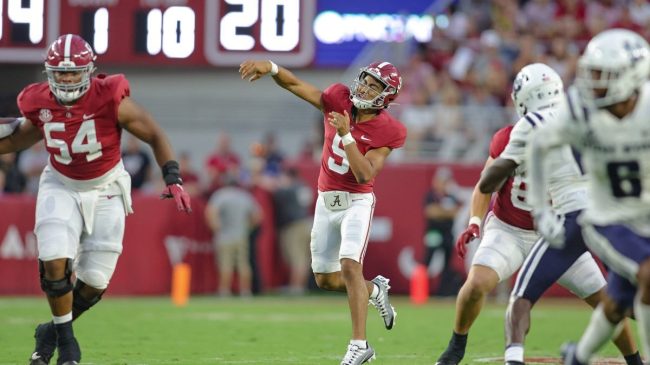 Alabama quarterback Bryce Young is perhaps the biggest star in college football today. The 2021 Heisman Trophy winner is back for his junior year and at the helm of the No. 1 team in the nation.

Young threw for an eye-popping 4,872 yards, 47 touchdowns and just seven interceptions a year ago on the way to being named the nation’s top player. He’s off to another fantastic start in 2022 as well. The Crimson Tide star produced 195 yards through the air and five touchdowns in a limited action in a 55-0 demolition of Utah State in week one.

But beyond the field, Young is quite the character as well. Thanks to new name, image and likeness rules for college athlete he’s allowed to show that off.

Young first appeared in a commercial for Nissan as he was welcomed to the company’s Heisman House.

The long-running annual commercials feature a bevvy of former Heisman Trophy winners living together in a frat-house style environment.

But that has nothing on Young’s newest commercial.

Catch me causing chaos in the new Fansville by @drpepper episode out now. #TeamBryce pic.twitter.com/DHDeiZT6yZ

In addition to Nissan, Young has partnered with Dr. Pepper to feature in their famous “Fansville” commercials. Not only is Young the star of the new commercial, but it also answers a ton of questions.

We learn what happens to last year’s protagonist, CJ, after he goes to college. And it turns out he’s been replaced by the Heisman Trophy winner. Honestly, it’s quite the upgrade.

Beyond the obvious win that is Young likely securing a sizable bag from Dr. Pepper, it’s also fun to see a side of college athletes you normally don’t get to see.

The public presence also probably doesn’t hurt Young in his push to become on the second two-time Heisman Trophy winner after Ohio State’s Archie Griffin did so in 1974 and 1975.