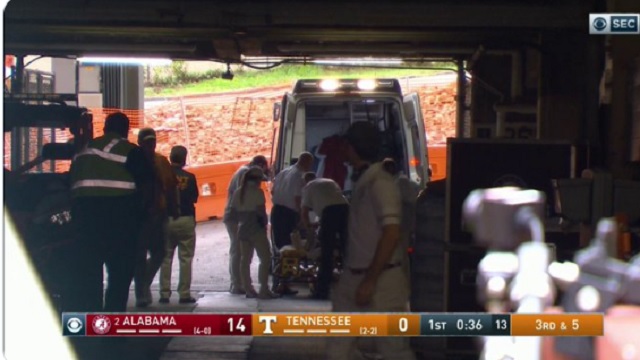 It seems like Alabama star wide receiver Jaylen Waddle is going to be out for a while.

On Saturday afternoon, Waddle was carted off the field after suffering a brutal ankle injury during the opening kickoff of Alabama’s game against Tennessee.

Jaylen Waddle —
As #5 rolls up on Waddle’s Right foot, you can see a sudden shift or shudder at the Talocrural joint. Waddle hopped off without placing weight through his foot. Immense pain.

I believe it’s a Dislocation, & generally these occur with a fracture as well. pic.twitter.com/VkMnczWZCA

After getting carted off the field Waddle was seen getting into an ambulance late in the first quarter.

Jaylen Waddle being loaded into an ambulance. pic.twitter.com/hKYGwGsz4u

Alabama WR Jaylen Waddle – one of the best players in the country – suffered an ankle injury on the opening kickoff return that he was carried off the field with and was eventually carted to the locker room for further evaluation.

Update: Alabama head coach Nick Saban told CBS that Jaylen Waddle is out for the year.

From Nick Saban – WR Jaylen Waddle OUT FOR THE YEAR.