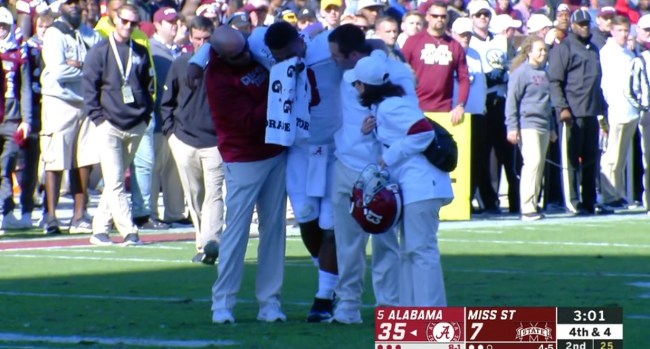 Right before the half, Tua got drilled in the backfield from behind and began bleeding from his nose profusely.

Tua, who has had ankle issues all season and was a game-time decision before today’s game, could not put any weight on his leg and had to be carted off the field.

Tua carted off after being unable to put any weight on his leg. Had to be carried into the cart. pic.twitter.com/d5NFkhX1mr

Nick Saban explained that he had kept Tua in to run the two-minute drill before the half for practice and had planned to take him out afterwards.

Nick Saban explains decision to keep Tua in the game up 35-7 "That was going to be his last series, we were going to do 2 minute before the half just for practice" pic.twitter.com/On5cVKkmlb

Before the injury, Tua appeared to talk Saban into leaving him in the game for one more series.

Here's video of Tua appearing to talk Nick Saban into keep him in the game right before injury pic.twitter.com/VdPcnRX2E8

Update: Apparently Tua has a hip injury and was reportedly screaming in pain as he made his way off the cart.

"He was screaming in pain as medical training staff had to pick him up and carry him off the cart." @MollyAMcGrath said the first report is that Tua Tagovailoa suffered an injury to his right hip vs. Mississippi State. pic.twitter.com/ppMJykMq9N