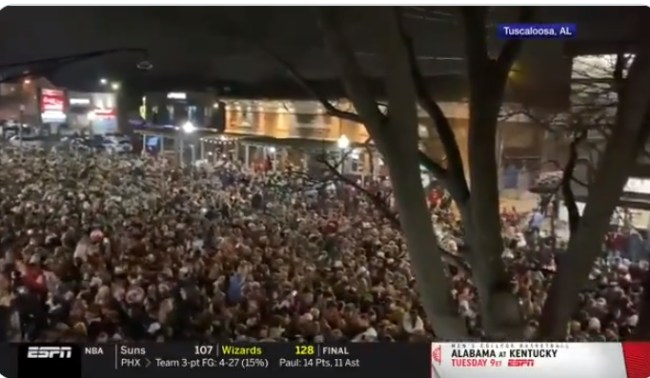 Before Alabama’s big game on Monday night, university officials urged fans to practice mask-wearing and social distancing while out on the street.

Tuscaloosa Mayor Walt Maddox went on to release a video to try to convince fans to stay home if the team won the national championship.

There will be a time and place to celebrate, but this is not the time.”

“Particularly in our downtown Strip area and other places of entertainment activity throughout our city it’s important to remember this — we can’t have block parties this year,

Alabama went on to crush Ohio State and things got pretty wild in Tuscaloosa as thousands of fans took to the streets to celebrate.

There is a significant police presence, but they are allowing the celebration on the Strip. And more fans – some masked, many not – continue to pour into the street pic.twitter.com/9VANn0gCLj

SVP reacts to the scene in Tuscaloosa after Alabama wins the national championship. pic.twitter.com/27mUo4gEr9

Of course, people on the Internet were furious at the images of thousands of fans celebrating close together during a pandemic.

you can almost see the mutations happening live https://t.co/yHKQJhczaE

You all won a championship & now COVID you absolute morons https://t.co/ncPsIiMwDQ

Congrats to coronavirus for its victory on the streets of Tuscaloosa tonight. https://t.co/CcztLe8v22

I guess the real winner tonight was Covid transmissions. https://t.co/GqyIT3AfBg

Cases are way up

Yea bro America isn’t recovering from any of this. https://t.co/Adn2gkLku2