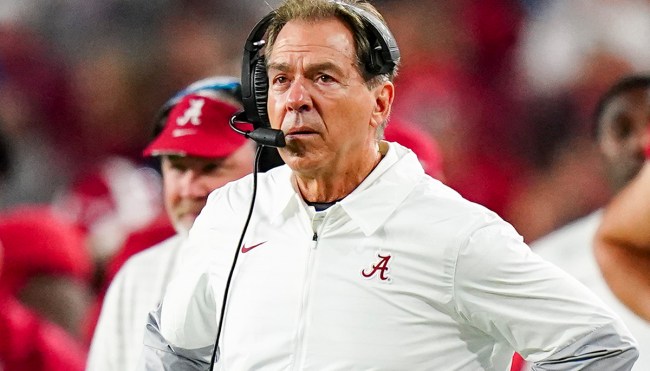 The Alabama Crimson Tide are fresh off a three-touchdown beatdown of Cincinnati in the first round of the College Football Playoff. Next up, a test versus SEC brethren Georgia for a chance to claim their seventh national title in 13 years. Most expected this to be the eventual outcome of the semifinal matchups, but many probably didn’t predict the opening betting line for a Georgia-Alabama showdown.

Despite the fact that the Crimson Tide beat the Bulldogs by 17 points in the conference championship a month ago, it’s Georgia that enters as the betting favorite. And that’s just how Alabama wants it.

Georgia is a 2.5-point favorite over Alabama in the national title game per @BetMGM. The total is 52.5.

Alabama was a 6.5-point underdog before winning the SEC title game 41-24.

Alabama has been an underdog three times since 2008. It’s won all three of those games outright.

Alabama has been an underdog just a handful of times over the last decade and a half, and they’ve won outright in each of those situations since the 2008 season.

As you can imagine, fans and the media took the opening spread as a sign of disrespect towards this Crimson Tide team; many quoted Nick Saban’s famous “rat poison” line as he’ll be sure to use the underdog narrative as a way of amping his squad up.

The kind of rat poison that Nick Saban loves https://t.co/rpBVvmQpjs

Alabama opens as the underdog-2.5 vs. UGA in the National Championship game in Indy, game total is set at 53.

What are your thoughts? My thoughts is that Nick Saban is going to love this week pic.twitter.com/FzMiVWZigz

Nick Saban will get to play the underdog card as the No. 1 ranked team in the national championship game. Gotta love it.

I’m trying to figure out why Georgia is favored in the rematch.

Saban is a mastermind of motivation and the Vegas oddsmakers just offered it up on a silver platter. It’s honestly a bit mind-boggling to see Georgia listed as the favorite. They’ve lost seven straight games to the Crimson Tide, including that blowout in the SEC title matchup. The bookmakers may have not learned their lesson the first time around. We’ll see if it bites them for a second time this season.

One thing is for sure, Alabama will be thinking of the disrespect often during this week’s national championship preparations.