Alabama OLB Will Anderson Jr. Puts The SEC On Notice With His Terrifying Goal For 2022 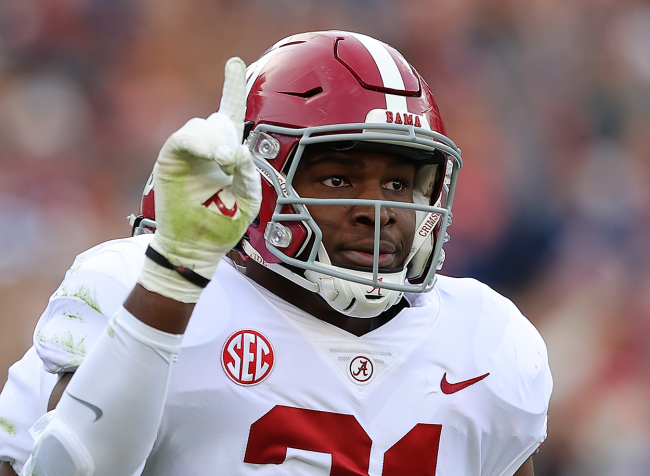 At 6-foot-4, 243 pounds, Will Anderson Jr. is an absolute monster. The outside linebacker for Alabama was one of the most dominant players in the country last season and is putting the SEC, and the nation, on notice ahead of 2022.

Anderson, who was the SEC Defensive Player of the Year in 2021, was a Unanimous All-American and won the Bronko Nagurski Trophy, given to the best defensive player in college football. And yet, he did not receive an invitation to the Heisman Trophy ceremony, while Aiden Hutchinson did— even though Anderson was the better defensive player.

Will Anderson Jr. joined The Paul Finebaum Show on Friday and spoke about his goals for this fall.

He said that entering last season, a Heisman Trophy was not even a thought. Even being in contention was not something he ever thought would or could happen.

“I want to just give a big shout out to all the people that supported me even though, you know, they thought I should have been there and I thought I should have been there, for them recognizing my play and my hard work,” Anderson said. “Like I told many people, it was quite a blessing because when I sat down and wrote my goals for the offseason, the Heisman was not even in my mind. It was nowhere to be found.”

“When the train got rolling and everything, the Heisman hype started, I think it was pretty cool, I thought it was really dope for a defensive player to get that hype. And, you know, I started thinking that I did have a chance. I was out there playing hard, just helping my teammates out by doing my best. But overall, I’m looking forward to that again. It’s most definitely on my goal list this year coming up. I’m looking forward to it. … I think it would be cool.”

Anderson recorded 101 total tackles last year. If he can match those numbers, it would be an impressive performance in what is likely his final year on the collegiate level. If he can exceed them, which might be necessary to win the Heisman Trophy, it would be complete and utter dominance.

It sounds like the latter is Anderson’s goal. And that’s frightening.