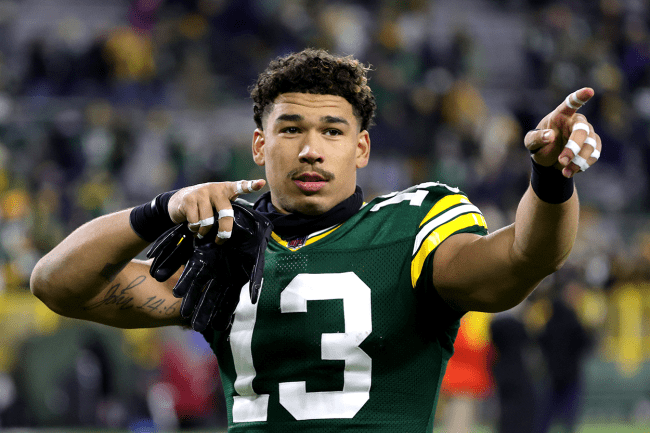 As things currently stand, Allen Lazard is slated to be WR1 for the Green Bay Packers this fall. But he is holding out of minicamp.

Lazard, 26, was an undrafted free agent out of Iowa State in 2018. Since then, over the course of four seasons in the league, he has quickly become one of Aaron Rodgers’ top targets. Especially when Davante Adams was out.

Over the last three years with Green Bay, Lazard caught 108 passes for 1,441 yards and 14 touchdowns. A large chunk of that production came when Adams was not on the field.

Well, Adams will not be on the field at all for the Packers in 2022. He now plays for the Raiders.

Thus, Lazard is the incumbent WR1. He will compete with newly-acquired Sammy Watkins, veteran Randall Cobb, rookie Christian Watson, and second-year Amari Rodgers for touches, but it seems as though he is the guy.

And yet, Lazard is not at minicamp this week. He is holding out.

According to his agent, who released a very contradictory statement on Tuesday, “everything [Lazard] is doing” is to help Green Bay win a Super Bowl and to help himself have the best year possible.

Statement from Allen Lazard’s agent, Peter Schaffer, on Lazard’s mandatory minicamp absence: “Allen’s total focus is on having the best possible season he can have as a player & helping the Packers win the Lombardi Trophy. Everything he is doing is to further those objectives.”

Of course, that doesn’t make any sense. Lazard is holding out.

Holding out does not help Lazard “have the best possible season he can have as a player” and it does not “help the Packers win the Lombardi Trophy.” Neither of those things are benefited by the team’s top wide receiver not participating in minicamp.

The internet agrees that Allen Lazard’s agent’s statement on his hold out does not make any sense.

sometimes the agents get it right, this is not one of those times

sometimes the agents get it right, this is not one of those times

Lazard is misjudging this one. Usually you have to show something before they pay you like you showed something. https://t.co/Z8oYUehxwY

To borrow a bit from @AndrewBrandt – Translation: "My client is going to ball out and get p.a.i.d. paid in free agency next year." https://t.co/xO2XwBk34v

Or Allen is striking while the iron is hot, knowing that this will most likely be the only moment that he is considered wr1, as the younger, faster wide receivers ramp up.

It will be interesting to see how long the holdout lasts and whether Lazard gets paid. Green Bay fans don’t seem particularly concerned about his absence.