Former MLB Executive Claims Albert Pujols Is Lying About His Age, Says It’s Not A Secret In MLB 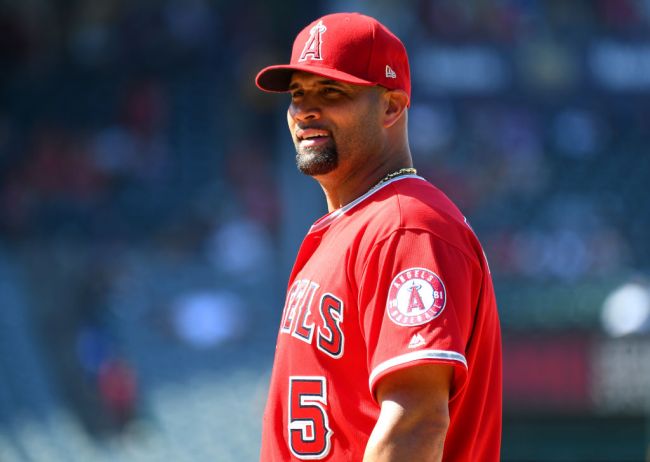 When the Los Angeles Angels signed Albert Pujols to a 10-year, $240,000,000 contract, one former MLB executive says that it came with an expectation for his production to drop. David Sampson, who served as the Marlins’ president from 2002 to 2017, was one of the suitors for Pujols during the 2012 offseason and claims that he has been lying about his age for his entire career.

During an appearance on the Dan Le Batard Show, Samson was reflecting on the offer that Miami sent to the former Saint Louis Cardinal and let what he claims to be a well-known secret slip.

“We knew when we did the calculations for that deal that we didn’t care about 2019, ’20 or ’21. It was so far in the future that it didn’t matter,” Samson said. “We knew he’d be unproductive, we knew that he was not the age that he said he was. We had all the information.”

Le Batard responded, “Did you just report flatly that Pujols is older than he’s always claimed to be?”

Samson said, “There is not one person in baseball, not one executive, who believes Albert Pujols is the age that he says he is. The amount of fraud that was going on in the Dominican back in the day, the changing of names, the changing of birthdays, it would blow your mind.”

There is a history with players from the Dominican Republic and its surrounding islands falsifying their ages, so it is highly possible that Pujols was among them. Wandy Rodriguez, Neifi Perez, Rafael Furcal, Bartolo Colon and Miguel Tejada were all revealed to be two years older than previously thought, and that doesn’t even begin to scratch the surface.

Sampson didn’t give Le Batard an age for how old Pujols may actually be, but the career .299 hitter may have accidentally hinted at his true age back in 2018 when he was describing his first home run.

By that math, a 13-year-old Pujols would have been a 41-year-old 28 years later. He also said in the same interview that he believed Dotel to be three or four years older than he was. That would have also made him 41 years old in 2018, which would make him 44 now. While we may never know the truth, Pujols’ career numbers make a lot of sense when you add three years in age to each season.

No matter what age he really is, Pujols is in the final year of his contract with Los Angeles. Many believe that it will be his last. However, the 40-something home run hitter said earlier this week that he would consider continuing his career. He currently sits at 662 home runs, and he would love to reach the exclusive 700 club.

“If I’m close to it, why not?” he told USA TODAY. “I don’t try to chase numbers, but 700 is a big number. If I don’t re-sign with the Angels, I’m going to have to find a team that will give me that opportunity. I just wish I had been able to stay healthy and didn’t have those injuries. Can you imagine if I had kept the pace I was on when I was in St. Louis? I’d have 800 homers by now.’’

There may be an explanation for why his pace dropped after he left Saint Louis and now we know. His age.