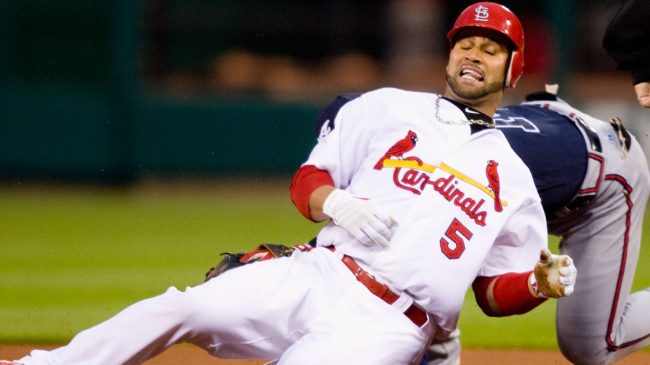 Albert Pujols is not the same player that he was during his first stint in St. Louis.

The 42-year-old returned to the Cardinals this offseason, a move that allows him to retire with his original team in the near future. Pujols broke into the majors with the organization in 2001, becoming one of the most feared hitters in all of baseball.

He opted to leave St. Louis in 2012, though, in order to continue his career on the West Coast. Pujols spent a decade in sunny Los Angeles with both the Angels and Dodgers, but he’s finally back in the place where it all started.

Of course, over those 10 years in between Cardinals stints, a lot has changed. Pujols has aged a bit, at least in baseball terms.

His physical abilities have left him with mostly a designated hitter role, as he rarely sees the field on defense. His speed and agility have decreased, but he’s still able to connect with a fastball with the best of them.

Pujols has gotten off to a hot start with the Cardinals, hitting .333 with a homer and an RBI through a pair of starts. But on Thursday, we saw some of those physical limitations during a hilarious steal attempt.

Pujols thought he got a jump on pitcher Brandon Woodruff early in Thursday night action. Let’s just say the attempt didn’t quite go as he’d envisioned it.

Albert Pujols was safe if you squint hard pic.twitter.com/QaUoeTUMmq

Pujols was thrown out by a mile (maybe more!), and it had even the announcers wondering, “What was he thinking?”

Unbelievably, though, this was the first time the veteran had been gunned down since 2015. He’d had a string of 14 consecutive successful steal attempts prior to that pickoff.

First time Albert Pujols has been caught stealing since September 19, 2015

He successfully stole 14 bases in a row since then pic.twitter.com/ulgcihCMym

Pujols still has something to offer the Cardinals on offense. He might just want to stick to hitting and leave the baserunning to those more suited.