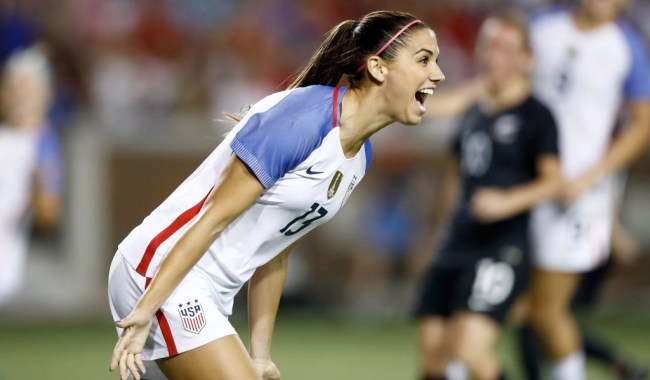 On Monday it was reported that soccer star Alex Morgan and a group of friends including two MLS players had been kicked out of Disney World for acting belligerent at a pub in Epcot Center.

The pub was located in the United Kingdom section of the park, and they are soccer players so really, something like that happening is not completely unprecedented.

That being said, according to the incident report obtained by TMZ Sports, it sounds as if Morgan and her friends might have taken things a bit too far.

The report, filed by the Orange County Sheriff’s Office, says they were initially called to the U.K. pub around 8:20 PM after MLS player Giles Barnes cut in front of another patron in line and got into a verbal argument.

According to the report, the deputies had to return to the pub after escorting Giles out because the rest of the group was still carrying on, so then they too got the boot and were “being very loud and belligerent towards staff around guests.”

The deputy noted that Morgan was especially out of control — “yelling, screaming and taking video and possibly pictures.”

“She appeared to be highly impaired. Deputy Johnson heard Ms. Morgan make a loud verbal statement that she knows the Orlando SWAT team.”

I want to apologize for my actions that occurred over the weekend. I will learn from this make sure it does not happen again. #liveandlearn

“I want to apologize for my actions that occurred over the weekend. I will learn from this make sure it does not happen again. #liveandlearn,” she wrote.

So do you really know the Orlando SWAT team ?? #justkidding

Girl stop.. who hasn't gotten kicked out of a bar? 🙂 pic.twitter.com/UHJ0Uetz8J

Meh, everyone gets kicked out of Epcot. Don't sweat it.

but c'mon, who hasn't had fun drinking around the world at EPCOT??

Still a legend for attempting the around the world.