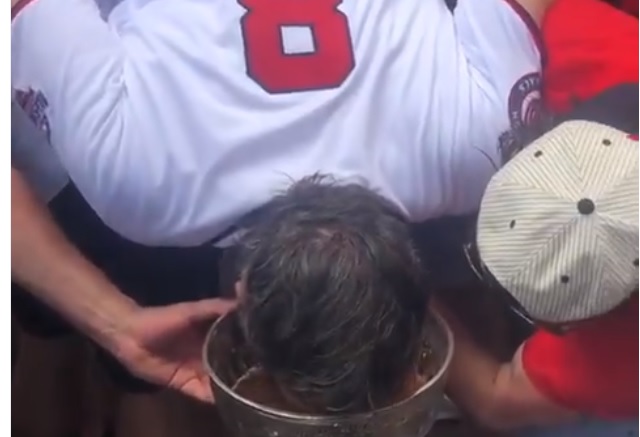 After 14 years of coming short of winning championship Alexander Ovechkin was finally able to break through and validate his career as one of the greats in NHL history when he won his first Stanley Cup on Thursday night.

“This is even better (than I thought it would be),” said an emotional Ovechkin, who sat with the Stanley Cup and Conn Smythe Trophy as the postseason’s most valuable player at his side. “It’s just a dream. We’ve worked so hard. This means everything. I think we were waiting a long, long time for this moment.””

Since then Ovechkin has been on a tear partying it up with Stanley Cup everywhere he goes. Today, Ovi and the Cup hit up a Nationals game where the Caps super star was able to throw out the first pitch.

After the game, Ovi had some Nats fans hold him up so he could do keg stands with the Cup.

He had a cup

A drunk Ovi was later spotted taking off his most of clothes and jumped into the Georgetown waterfront fountain.

Man it’s great to see Ovi with the weight of winning a Stanley Cup off his shoulders just enjoying life and getting hammered.