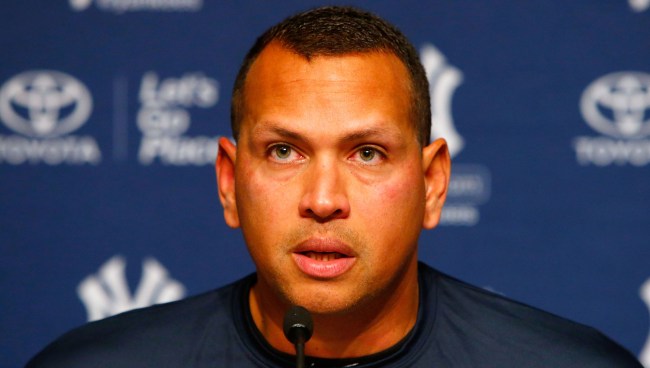 The lawsuit claims Rodriguez stole millions from Scurtis and tried to profit off the damage caused by Hurricane Ike.

Scurtis, the brother of Cynthia Scurtis, Rodriguez’s wife from 2002 to 2008, filed a 136-page lawsuit against A-Rod which claims the former ballplayer committed fraud, forged and falsified documents, and cut him out of the company they formed together.

“After Rodriguez’s wife discovered the truth about Rodriguez’s infidelity and filed for divorce, Rodriguez then turned on (Constantine) Scurtis and cheated him,” reads the lawsuit.

“Through their racketeering,” the lawsuit claims, “Rodriguez and his co-conspirators have caused Scurtis many millions of dollars in damages.”

Scurtis said that in 2014 he asked his sister to reach out to Rodriguez, but the “response conveyed to Scurtis was that Rodriguez would never pay him another dollar ever again.”

Scurtis also provides a dramatic retelling of a time in 2007 when Rodriguez allegedly looked him in the eye and swore he never had been unfaithful to his sister. Not long before, the New York Post reported that Rodriguez had been caught entering a hotel room with a stripper.

In addition, Scurtis says one of Rodriguez’s businesses “concocted a scheme to profit off of the devastation wrought by Hurricane Ike,” which which was blamed for at least 195 deaths and billions of dollars in damage in 2008. In the alleged scheme, Rodriguez’s company, Newport Property Ventures, created accounting records “reflecting significantly inflated damages” to the properties it owned. Scurtis claims that Rodriguez then paid off a whistleblower to stay silent after she called them out on it.

Scurtis’ attorney Nate Holcomb said Roderiguez “first cheated on his wife and then cheated Mr. Scurtis out of the proceeds from their wildly profitable real estate venture.”

“Mr. Rodriguez will face a jury on August 2, 2021, to answer claims that he and his co-conspirators engaged in a pattern of racketeering and embezzlement,” said another of Scurtis’ attorneys Katherine Eskovitz.