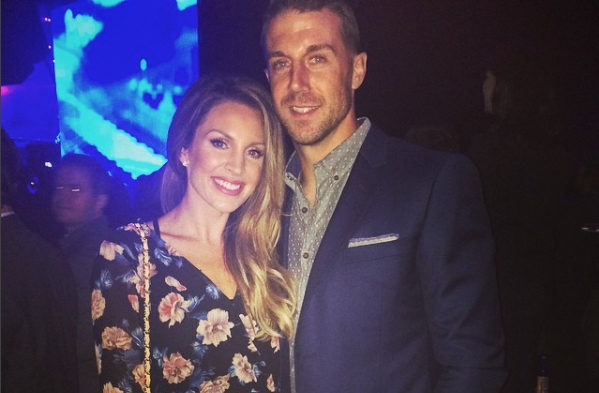 For an elite quarterback in the NFL, getting girls must be easier than beating the Cleveland Browns. A publicist for pro athletes revealed to Deadspin that one of his main job responsibilities was to keep a phone for his client and respond to the women who texted. His only instructions were to “see how dirty they get.” The phone lit up like a Christmas tree with women of all types, married women included.

During a recent joint appearance on “In Depth with Graham Bensinger,” Smith and Elizabeth–his wife since 2009–detailed the circumstances in which the two met at a West Coast hot spot. Turns out the former Raiders cheerleading captain wanted little to do with the then 49ers QB and his buddy had to pull the ultimate bro move for the two to connect.

“I was with a girlfriend and Alex happened to be with someone I had grown up with, he introduced us. … It was, maybe not love at first sight,” Elizabeth said.

Smith, a shy guy, attempted to make small talk, which is typically enough for someone of his stature.

“You weren’t the most talkative person,” Elizabeth recounted. “I mean, Alex is a pretty shy guy when you first meet him, quiet. So he was really sweet, came over, but I was with a girlfriend, there to have a good time, just me and her.”

When Smith asked if he could buy Elizabeth a drink, she declined and went to go chat up their mutual friend she grew up with. That’s when the dude cleverly tossed his buddy an alley oop.

“My friend, who I had run into and kind of caught up with that night said, ‘Give me your number, let’s chat, would love to catch up.’ So I gave him my number and left with my friend, and he, unbeknownst to me, went to Alex and said, ‘Here, she wants me to give you her number,’” Elizabeth explained.

If his buddy told Alex that the number was actually intended for him, Smith’s life would be vastly different today. He probably wouldn’t be happily married to a supporting wife and mother to his three healthy children. Likely wouldn’t be with someone who donates her time to charities and nonprofits in the Kansas City area. But, never underestimate the power of a wingman.

Smith reached out to Elizabeth a few days later via text, and she was a bit confused.

“She was totally miffed like, ‘Uhh, who is this? I didn’t give my number out.’ So that’s when I first found out that he had totally just done this unbeknownst to either of us,” Smith said.

Elizabeth eventually called Alex back to apologize, and they spent the rest of the night talking. The rest is history:

Back at it with this crazy crew.! Getting 3 kids to look at a camera is impossible. We can't even get one 👀

Honors with this guy!! #superbowl

Check out the two talking about their genesis story below: