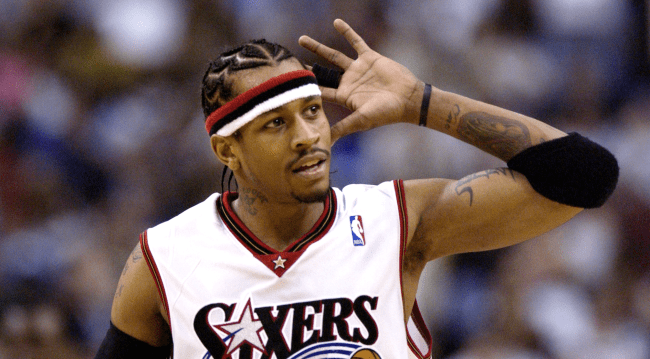 NBA legend Allen Iverson recently gave a lengthy interview to Shaun Powell of NBA.com where he discussed numerous topics including his reputation, that iconic crossover of Michael Jordan, some memories of Kobe Bryant, his former coach at Georgetown, John Thompson, and more.

The Hall of Famer, now 46, was doing things early in his NBA career that would be considered normal now, but back then they earned him a reputation as a thug. Things like the way he dressed, wearing his hair in cornrows and covering his body in tattoos.

“I didn’t understand why people looked at me a certain way because of how I dressed,” said Iverson. “But obviously, it was so different then because nobody was doing it. I was dressing like the dudes I grew up with.”

He continued, “It wasn’t me trying to create a certain image. It was me being me. There was kind of a certain way guys were coming into the league then. Everybody was doing the same thing. Not that it was a bad thing. Everybody was wearing suits and they were following suit because of the guys before them. And my whole thing was, I never wore no suit to the gym, to the courts. I was just wearing stuff to the place I was going after the game, you know what I mean?

“I think a lot of other guys always wanted to do that. I don’t know if it was fear or whatever that they didn’t. When I did it, it wasn’t a big deal to me. Like my tattoos. I would’ve gotten more tattoos before I got into the NBA, but I couldn’t afford ‘em.”

Iverson added, “People were making a big deal about it [his hair], like it was a thug thing, but I was tired of (barbers) messing my hair up on the road. If I could get a cornrow, I wouldn’t have to worry about that.”

A.I. also gave credit to late Georgetown coach John Thompson for getting and keeping him on the right path as he was entering college.

“Coach Thompson saved my life,” Iverson said. “My mom went up there to Georgetown and basically begged for me. He gave me an opportunity. We would always joke later. He was like, `If your mom didn’t come up here, then you wouldn’t be who you are, and I gave you a shot.’ And I’m like `C’mon coach, it had something to do with my talent, too, now. I made you look good, too.’”

He also spoke of the last time he saw Kobe Bryant, at the Lakers star’s jersey retirement.

“Last time I saw him. I remember hugging him. He had his baby in his arms, his youngest daughter. That’s wild,” he said, adding, “We try to think like they’re in a better place. We try to do anything to make it feel better. That’s why my life is how it is. I live every day.”

Of course, no discussion of Allen Iverson’s career would be complete without talking about that time, as a rookie in the NBA, he crossed up the GOAT Michael Jordan.

“All I could think about is I had no fear,” Iverson recalled. “I feared so many other things off the court, but nothing on the court. (That crossover) was indicative of how I felt as far as being fearless on the court. We was at war. I looked at him as anybody else being in front of me. Coming into the league, I knew if I had the opportunity of trying my move that I was going to do it, and not be fearful of it.”