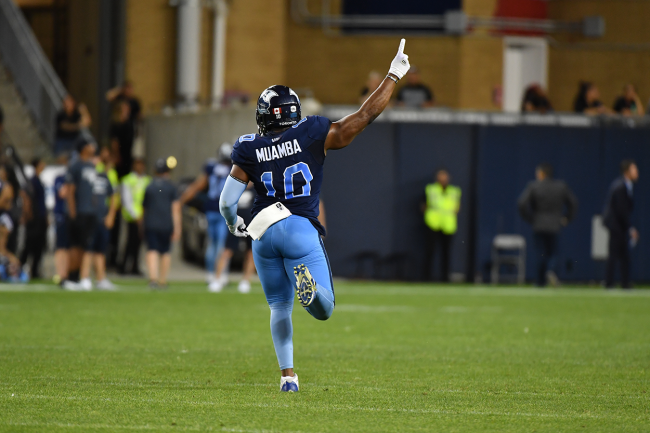 The Montreal Alouettes are 0-1 to begin the 2022 Canadian Football League season. But it didn’t have to be that way.

On Thursday evening, the Argonauts hosted the Alouettes in Toronto for what quickly became a chippy battle between the two sides. Things got testy early in the first half when the play went past the whistle.

After pulling him to the ground, a Montreal player proceeded to stomp down on his opponent while getting up. The Toronto player didn’t take kindly to the gesture and grabbed his foot, which set off a chain reaction that resulted in a kerfuffle.

From there, the opening CFL game between Montreal and Toronto got good.

After falling behind 19-9 to the Argonauts at the end of the third quarter, Montreal came storming back with nine points in the fourth quarter to cut the game to two. After the Alouettes scored their only touchdown of the night, running back Dominique Davis gave the ball to his lineman to celebrate.

What happened next was hilarious. The lineman, who rarely gets a moment in the sun, wanted to make sure that his celebration made it on-air so he grabbed the camera to make sure he got the shot while he spiked the football.

CFL lineman gets the ball to spike after TD, grabs the camera to make sure they get it pic.twitter.com/TYu9pfqghE

And then, after the momentum finally started to swing in Montreal’s direction, things took a turn for the worst. The Alouettes drove down the field in the closing moments of the fourth quarter and set up a would-be game-winning field goal.

As the clock wound down under fifteen seconds, David Côté sent it sailing wide left. He missed.

Montreal got a point back on the kickoff (CFL rules are weird) but lost by one to start the year. Kickers, man…