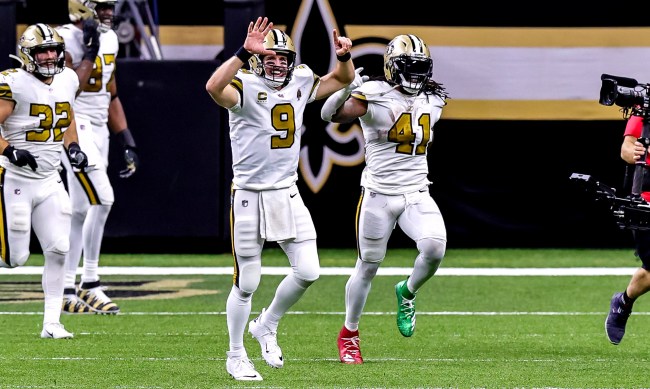 On Christmas Day 2020, New Orleans Saints running back Alvin Kamara did something that only one other player in the modern history of the NFL, Gale Sayers, had done before, way back on December 12, 1965, when he scored an eye-popping six touchdowns versus the Minnesota Vikings.

For the record, Dub Jones of the Browns also did it in 1951 when there were just 12 teams, while Ernie Nevers of the Chicago Cardinals did it in 1929 when the league included teams like the Staten Island Stapletons, Dayton Triangles, Frankford Yellow Jackets, Orange Tornadoes, Minneapolis Red Jacket, and Providence Steam Roller.

He could have had the record all to himself, but Saints head coach Sean Payton loves him some Taysom Hill, so it didn’t happen.

The one thing Kamara did that Sayers did not do in scoring six touchdowns in one game was that the Saints star scored his six while wearing red and green cleats to celebrate the game being played on Christmas.

After the game, Kamara was asked about his colorful shoes and what the plan was for them and he said he’s kept all his shoes from his entire career stored in some sort of cabinet.

Kamara was, of course, fined for wearing them, $5,000 by the NFL, but Kamara knew that was going to happen, saying after the game, “If they fine me, whatever it is, I’ll just match it and donate it to charity. You know that the Grinch always tries to steal Christmas.”

What he may not have expected was for the Hall of Fame to call and ask him to send some of his gear from his record-tying day, including the “illegal” shoes.

On Monday, Kamara shared a photo of the package he had put together for the Hall of Fame which included said cleats, the balls from his fifth and sixth touchdowns, his game jersey, and a little something extra… the fine letter from the NFL.

5th and 6th td ball… and some other stuff. pic.twitter.com/1pik6BFlHS

Of note: this is now the second time Kamara will have been celebrated in Canton as he and his then teammate Mark Ingram had their jerseys put on display after they became the first NFL running back tandem to each gain over 1,500 yards from scrimmage in a single season back in 2018.