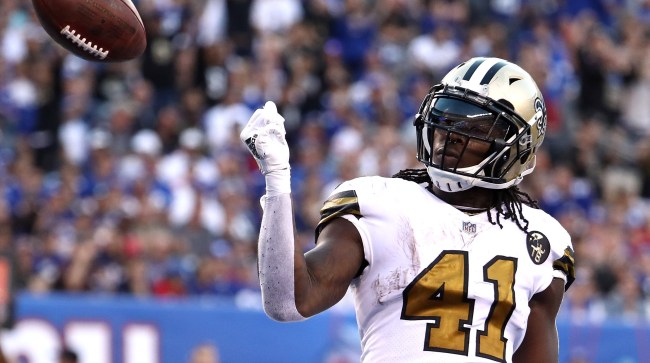 New Orleans Saints running back Alvin Kamara is not your average human being. He lives life to the beat of his own drum and he’s capable of superhuman feats that the average Joe can only dream of accomplishing.

Kamara has only played two seasons in the NFL and yet stories about him are already becoming legend.

From his two full-length leg sleeve tattoos to what he does with his awards and how frugal he is with money to working blue collar jobs on his day off during the season, Kamara is the definition of unique.

And don’t even get me started on his insane offseason workout training program.

On top of all that, Kamara is also something of an expert at social media, joking with teammates about needing money and routinely trolling Twitter for girlfriends.

It’s that latter habit that seemingly got under the skin of one fan who wrote on Twitter, “Just read an article about @A_kamara6’s impressive offseason workout regiment but I wouldn’t know that here because all he tweets about is putting out notices he might steal everyone’s girlfriends. I’d love to join him when he does service in the community though.”

Apparently Kamara noticed the complaint and issued really the only response that was appropriate.

You got a girlfriend?? https://t.co/PwtVTh3roU

This also led to a pretty awesome back and forth between the two men.

My wife has several single friends she can set you up. I’ll donate/volunteer for your foundation or buy you as much arm tape as you want. Please don’t steal my wife. She’s all I got. 😩😩😩

😭😂😂😭 you know I’m playin. Lol ion een steal girlfriends, I’ll borrow em though. And only if they not my patnas girlfriends. #GCode

You’re a living legend, man. Seriously, I’m definitely down to join you on a Tuesday and get to work. I’ll be sure to come with a list of cell phone numbers you can follow up with and we can update your online dating profiles.

Are you doing service in the community? Why can't it be an invite for him to join you?

@A_kamara6’s a hero in the community, proven by this article. I’d love to get to work and give him an extra set of hands when he does it next. https://t.co/zL0wVyRcEq

My camp June 1st in New Orleans. You can come through 🤙🏾

I would absolutely love that! Should I DM you for details? Should I bring my wife? 😂😂😂

Alvin Kamara really is the best… in more ways than one.