Saints Star Alvin Kamara Keeps His Rookie Of The Year Trophy In A Closet, Won’t Pay $30 For A Cab 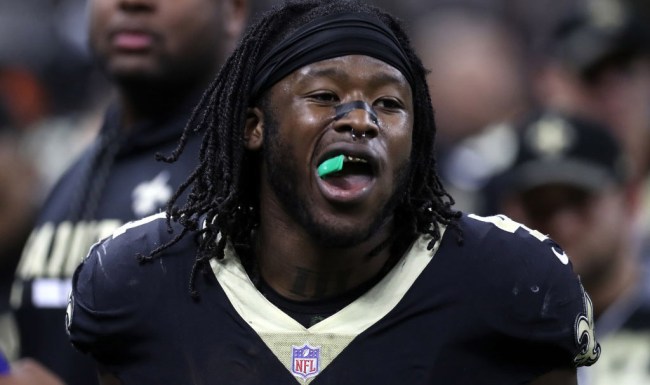 New Orleans Saints star running back Alvin Kamara has no shortage of confidence. I mean, how many other NFL running backs do you know of, past or present, who wear a nose ring and a gold grill while he plays? Doing either of those things on the football field takes some balls, let alone doing them both at the same time.

I guess when you are the fifth running back selected in the 2017 NFL Draft and then you go out and win the NFL Offensive Rookie of the Year award you are entitled to be a little cocksure. After all, again I ask, how many other NFL running backs do you know of, past or present, who can say that they rushed for over 700 yards (at 6.07 yards a pop) and caught over 80 passes for another 800+ yards? The answer to that question is just two more than the answer to the first question.

I point out all of this because, in case you hadn’t noticed, Alvin Kamara is no ordinary person.

Never hear y’all complaining when that check clear…. GET YA MONEY!!!! •@coltcolletti_ • 🦍

This is something that becomes even more apparent in a recent interview the second-year back gave to Sam Schube of GQ where Kamara talked about, among other things, how he hadn’t watched his rookie-year highlights, his choice to live in downtown New Orleans, how he walks home after home games, and where he keeps his Rookie of the Year award.

When his friends said they wanted to watch Kamara’s rookie-year highlights he told them that he hadn’t even seen them. So they watched them and his reaction was, “I was like, ‘Man, I did that?'”

Never lost faith.. it got rocky but lemme tell you somethin, It’s not what’s on ya it’s what’s in ya! 🤞🏾#offensiverookieoftheyear

When he was asked about why he lives in downtown New Orleans, instead of in the suburbs by the team’s practice facility, his answer was very simple.

“I couldn’t leave the facility and drive two minutes and be at my house and act like, ‘Yeah, this is where I wanna live,'” said Kamara. “Shoot, I want to live downtown, so I’m about to go live downtown.”

Since he does live downtown, rather than drive home from games at the Superdome, Kamara says he prefers to walk, even if his family and friends don’t always want to join him.

“I’m not really looking for the attention when I’m walking,” said Kamara. “We leave the locker room, me and whoever it is that came to the game, family, friends, and we just walk. Sometimes it’s an issue. It’ll be hot, or it’ll be raining. They’re like, ‘Man, we gonna have to call an Uber.’ And I’m like, ‘Shit, all right. I’ll meet y’all at the house. I’m walking.'”

Why does a guy with his high profile choose to walk instead of just taking a cab or an Uber? It costs 30 bucks! Plus it’s just easier.

“It’s harder to get in the car and drive from the game because there’s so much traffic,” he explained. “I’m not about to call a Uber. I’m not about to take a taxi, because a taxi from the stadium to my house would probably be $30, when I could walk and get there in 10 minutes. It just makes sense.”

But… he makes good money, he can afford to pay for a ride, right?

When asked where he keeps his 2017 NFL Rookie of the Year trophy, Kamara revealed that it was in a box in his closet, “Yeah, it’s under a whole bunch of shit, honestly. I can’t even lie.”

Why is it in his closet, I can hear you asking?

“I haven’t found a spot. I haven’t put it up nowhere or nothing,” Kamara responded. “It’s still in the case that they sent it to me in. I opened it once, I looked at it, and I put it in the closet.”