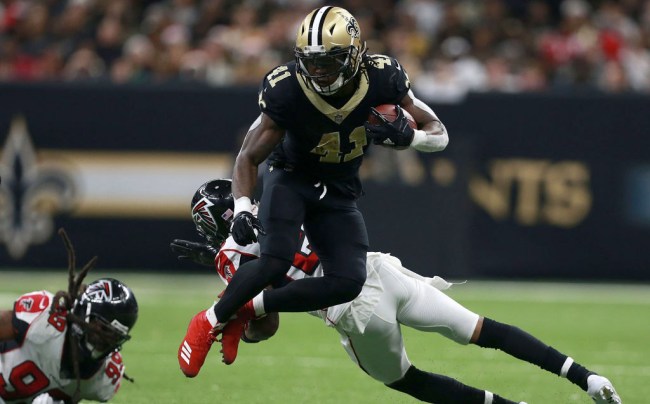 2017 NFL Offensive Rookie of the Year, running back Alvin Kamara of the New Orleans Saints, was the fifth running back selected in the 2017 NFL Draft. Something a lot of NFL general managers probably regret letting happen (he went in the third round — 67th overall) after Kamara rushed for 728 yards (at 6.07 yards per carry) and caught 81 passes for another 826.

Granted, Kamara only started in eight of 24 games during his two years at the University of Tennessee, but bro still had over 2,000 yards from scrimmage and averaged a touchdown per game during that time, so yeah… whoops!

Also, considering Kamara’s ridiculous offseason training regimen, the success he has had so far in the NFL comes as little surprise.

And speaking of Kamara’s offseason work, he has also spent a ridiculous amount of time in a tattoo parlor during that time based on a look at the second full-length leg-sleeve tattoo he just completed.

This second sleeve on his left leg has all sorts of interesting facets to it not the least of which includes a warrior inside of a sabertooth cat’s mouth on his knee cap. Check out Kamara’s new ink in all of its glory below.