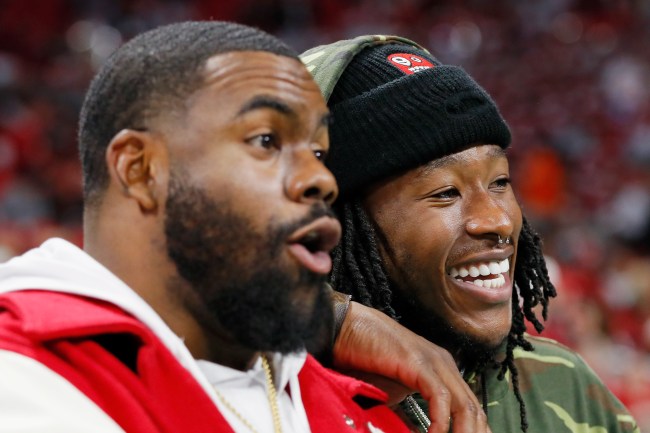 Alvin Kamara of the New Orleans Saints is one of the most dynamic (and fun) players to watch in the NFL. He’s part explosive running back, part versatile wide receiver, which made him a matchup nightmare while on the field with his now former Saints teammate Mark Ingram, who just inked a three-year, $15 million deal with the Baltimore Ravens.

While Kamara and Ingram together were a load for any defense to try and slow down, their postgame interviews were even more lethal, as the two often paired up to talk with reporters in a unique way that most NFL players don’t get down. They’ll definitely be missed next season, but, hey, Mark Ingram had to do what he had to do and take that money, right? I mean, just look at the absurdity of these two talking to the media together. It’s A+ stuff.

Before the ink was even dry on Ingram’s new Ravens contract, though, Alvin Kamara wanted to congratulate him in the most Alvin Kamara way possible — by sending a hilarious tweet begging for money. Take a look at what the third-year runner sent to his former battering mate in the Saints’ backfield.

Aye I gotta pay my rent… and my light bill…. and I got 6 girlfriends, I needa get dem situated. Lemme hold sum sir @MarkIngram22 💰 😂 love you bro congrats. You finna be cold as hell.

This is too good, guys. Alvin Kamara might be losing a teammate and, presumably, his best friend on the Saints, but at least he’s having some fun in the fact Ingram’s moving to Baltimore as he collects all those millions of his.

Considering Kamara was a third-round pick a couple of years ago and has yet to get his big payday — he’s “only” making about $1 million in 2019, per Spotrac — he may actually not be joking too much about this. Have you guys seen how expensive rent prices are these days? They’re insane.

Anyway, even as Ingram moves on, it’s good to see Alvin Kamara have a sense of humor about it, offering up congrats in the best way possible. Now can the Saints pay this man, because he’s a damn beast.