Danny Amendola Tries To Explain His Olivia Culpo Rant; Julian Edelman Tells Him To ‘Get Off Instagram’ 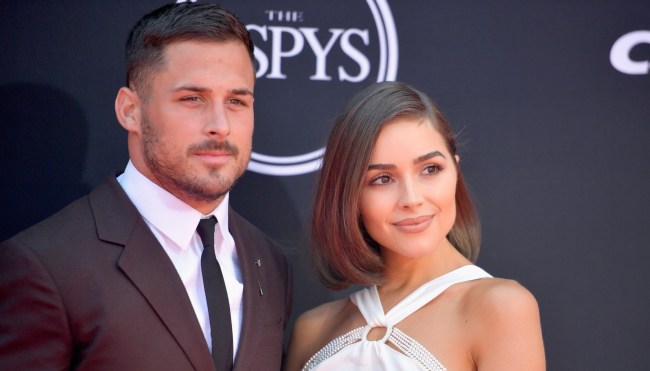 Lions wide receiver Danny Amendola followed up his bizarre Instagram rant about his ex-girlfriend Miss Universe 2012 Olivia Culpo with another Instagram post where he tried to explain himself. It didn’t really work.

On Friday, Amendola shared WAY too much personal information, that no one asked for, about his relationship with Culpo, saying inappropriate things like, “the sex was f**ing crazy” and talking about how “private” he is.

On Saturday, the wide receiver tried to clear things up with another (since-deleted) Instagram post where he attempted to explain his rant about Culpo, writing, “What I meant to say yesterday was that the media and general public have no idea what goes on behind closed doors. I don’t participate in fake intangibles that consume the public eye. I’m a private, single guy and if everyone’s happy – I’m happy. It’s not fun seeing your name attached to a click-bait headline story that is completely fabricated bullsh*t..so when I saw this love triangle gossip I tried to clear the air. I take blame for the miscommunication! Good vibes only from me! ALL LOVE ❤️ always – DA.”

Then Mr. Private posted a photo to Instagram with the caption, “Fake people have an image to maintain. The real ones jus don’t care.”

Apparently that was all Julian Edelman, Amendola’s BFF and former teammate on the Patriots, could take and decided to heat-check his bro and commented, “Get off Instagram please… thanks.”

DEADDDD Julian Edelman come get yo man. 😂😂😂😂😂 Amendola please listen to him. pic.twitter.com/j2WrjcpWd3

Edelman has since deleted the comment, but hopefully, for Amendola’s sake, the message was still received.