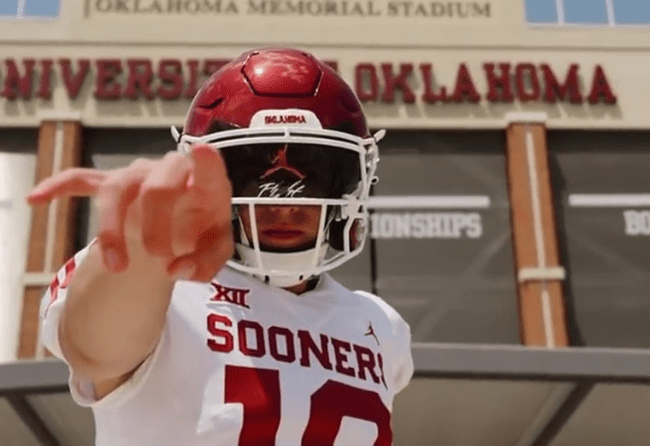 Earlier this week, the University of Oklahoma received another commitment who is set to join the Sooners’ quarterback room. It just so happens that he has the best name in college football.

General Booty, the nephew of former NFL quarterbacks John David and Josh Booty, began his college career at Tyler Junior College in Texas. In his one season with the Apaches, he led the nation with 3454 passing yards and threw for 28 touchdowns.

Now, after receiving offers from New Mexico, Presbyterian, Liberty, Yale, Nicholls State, McNeese State and Louisiana-Monroe, he is taking his talents — and his very unique name — to Norman to play for Brent Venables and offensive coordinator Jeff Lebby at Oklahoma.

Booty played his senior year of high school at Allen High School in Texas, the alma mater of Kyler Murray, and quickly garnered attention for his big arm.

Before that point of his career, he turned heads with his name. General, the son of former LSU wide receiver Abram Booty, received his unique first name because of his father’s fascination with the military.

Ever since, everywhere that General goes, people remember him. If not for his on-field talent, then for his name. That was certainly the case after his commitment to the Sooners earlier this week.

Of those who took note, a very interesting business opportunity arose.

In the current era of Name, Image and Likeness, college athletes are able to profit from endorsement deals, public appearances, and many other promotional opportunities. Booty may have one coming his way soon, should he choose to go that route.

American Eagle, the famous lifestyle, clothing, and accessories retailer, caught wind of his name and floated the idea of a sponsorship.

Of course, a literal booty — as in the buttocks — and pants go hand-in-hand, if you didn’t catch on. Booties go in pants. American Eagle sells pants.

Should General decide to take American Eagle up on its offer, it would be legendary. General Booty could make money while in college, which is awesome, and American Eagle could roll out a marketing campaign around the Oklahoma quarterback. It’s a perfect match!