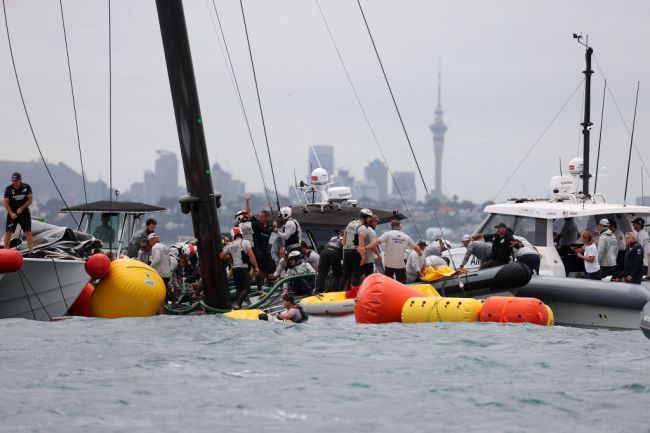 The United States challenger for the America’s Cup suffered a horrible crash on Sunday when a burst of wind sent the boat airborne and capsized into the water. American Magic, out of the New York Yacht Club, lost its first three races of the Prada Cup but was destined for its first win of the series before the strong gust sent the bow skywards.

The Prada Cup is a three-boat Challenger Series that will decide who takes on Team New Zealand, the defending champions, in the America’s Cup— sailing’s oldest international competition. American Magic was leading Italian competitor Luna Ross on the final mark but was ultimately forced to withdrawal from the race. Team Skipper Terry Hutchinson discussed the accident and how it was caused by a gust nearly double the amount of knots.

The technology that goes into the yachts that are used in competition is insane and costs millions of dollars. Thus, once the 11-man crew was accounted for, the focus immediately turned to saving the boat from sinking. Coastguard, race officials and support crews from every country competing hurried to install flotation buoys to keep it from falling below the surface, while the race activated its emergency management plans.

The American yacht, named Patriot, took nearly six hours to pull out of the water after a herculean effort to secure the hull and tow it back to the team’s dock. Hutchinson said that “there was definitely a lot of concern” about whether the Patriot could be saved after it sustained a gaping hole in its hull. He said on Monday that the yacht sustained severe structural damage that will require the complex system that controls the foils and electronics to be replaced.

“The easiest part is the rebuild [of the broken hull],” Hutchinson said. “The hardest part will be getting the electronics and FCS [foil cant system] up to speed. The yachts are finicky. Yesterday was day 45 for Patriot and she has been very reliable, but if you have worries it will be dealing with the gremlins inside the boat.”

It will take anywhere from eight to 10 days to return the yacht to racing shape, forcing the American team to miss the next round of racing. All is not lost, however, as the semifinals continue in 11 days. With only three teams competing in the event, only the Round Robin winner advances to the final of the Prada Cup. The American team will face the second-place finisher for a spot in the final if the boat is able to compete by Jan. 29.

It will be a daunting effort to get the AC75 yacht back to form, but if nothing more is to come from the American team in this competition, leaving the crash without injury is a win.