6-Foot-8, 305lb Anderson Mirambeaux Is An Absolute UNIT With The Fanciest Footwork In College Hoops 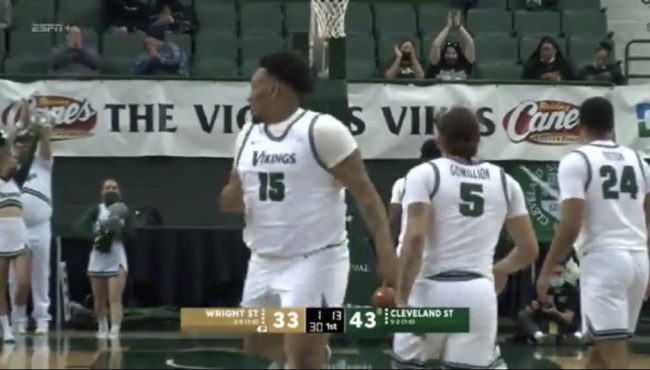 Cleveland State basketball is on a roll this season. At 14-4 overall and 10-1 in conference, the Vikings are sitting atop the Horizon League standings and have a legitimate path to the NCAA Tournament.

On Friday night, Cleveland State traveled to Wright State and beat the Raiders by four points down the stretch. Senior guard Torrey Patton led the way for the Vikings with 25 points and nine players found themselves with a bucket.

Among them was Anderson Mirambeaux. He is a massive presence on the court, literally.

Although he only played seven minutes, the Dominican Republic-native made the most of his time with two rebounds and four points. His points per minute was the highest on the team and he had more rebounds than the other Vikings who played less than 10 minutes.

Mirambeaux primarily plays in the five-spot, though he is listed as a forward, and there is nobody in college basketball with better footwork at 300 pounds. And when he needs to hustle back on defense, the big fella gets down the court in a HURRY.

As for his putback game, it is unmatched. If Mirambeaux is in the paint, you might as well get out of the way because he’s coming in and taking what he wants.

Dominance is nothing new for Mirambeaux. He has been a beast since high school.

And you better not leave him open beyond the arc because Mirambeaux will splash a triple right in your face.

Although Cleveland State may not be on TV often, any opportunity to watch Mirambeaux play is one that is worth taking. He never fails to put on a show, no matter how much or how little he is in the game.

The Vikings are sneakily having a phenomenal year. Look for Cleveland State to be in the big dance come march.