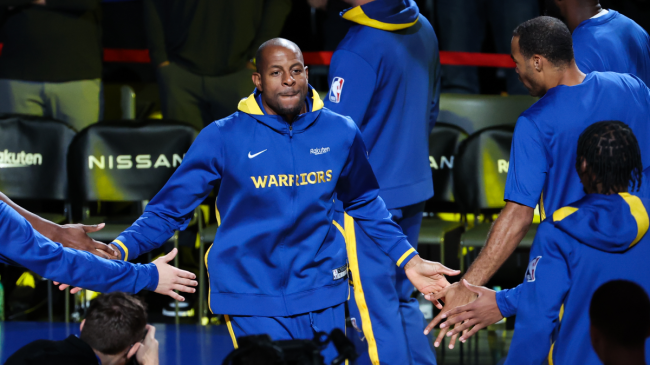 Golden State forward Andre Iguodala is setting the record straight on the Jordan Poole, Draymond Green altercation. The two teammates were seen in a scuffle at practice on Wednesday, leading to headlines throughout the NBA world.

Many on social media were quick to blame the youngster, Poole, who teammates reportedly said “has changed” since entering contract negotiations with the team.

“Draymond was “apologetic” after his altercation with Jordan Poole, but teammates have noticed a change in Poole’s behavior throughout camp amid contract extension talks”

Iggy wasn’t having the Poole slander, and he let his thoughts on the altercation be known.

After seeing some of the negative reports surrounding Jordan Poole, Iguodala took to Twitter in support of his teammate. He posted the following message online shortly after the incident made headlines.

Many were quick to react to that tweet, speculating on who is at fault in the fight. Take a look.

Facts we know it was draymond fault gang

So what you’re saying is that Draymond is the problem

While he backed Poole amid the recent criticism, he didn’t necessarily hang Draymond out to dry. Iguodala posted a message showing some support of Green, though it was not nearly the resounding endorsement sent for JP.

And it’s family business with my bro @Money23Green too…

All doesn’t appear to be well in Title Town. We’ll see if these tensions continue to affect the team throughout the season as they defend their championship.