Random Miami Heat Fan Tricks NBA Twitter And Players Into Thinking Andre Iguodala Quote About Duncan Robinson Was Real, It Indeed Was Not 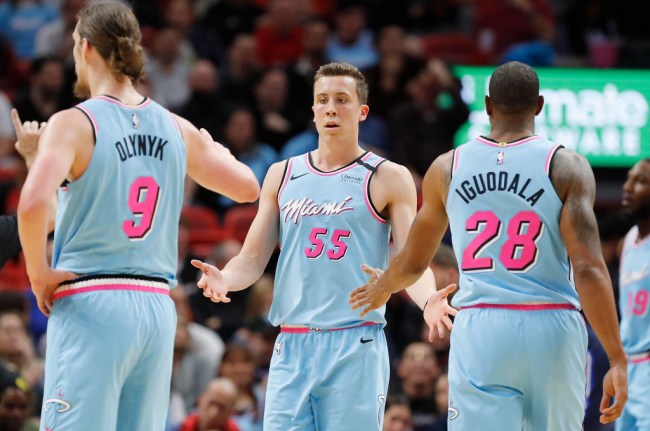 Part of the beauty of Twitter is that anybody can get got with some sort of fake post at any given time, it’s almost inevitable that you and everyone else are going to get tricked into believing something that simply isn’t true at some point or another.

The latest fake viral post in the sports world involves a quote from Andre Iguodala about Miami’s sharpshooter Duncan Robinson. A Heat fan posted a quote claiming that Iguodala said that the first time he saw Duncan he thought he was the team’s ballboy and then after he drained six three-pointers in a game he realized he was the real deal. Iguodala also (falsely) went on to say that Robinson is the best shooter he’s ever played with.

Shoutout to the fan for putting together the quote because it’s actually pretty well-written and funny, but everyone should have known it was fake as soon as Iguodala was quoted saying that Duncan is the best shooter he’s ever played with.

Iguodala has, of course, played with Steph Curry, Klay Thompson, and Kyle Korver over the years, just to name a few elite shooters he’s teamed up with. Robinson is having a fantastic season shooting 43.8% from three-point land, but that still doesn’t put him in the same company of those three players.

I do be saying some crazy shit… but not that crazy…

Congratulation to the fan that made the post, though, because he did catch Lou Williams and CJ McCollum slipping on Twitter thinking that it was real.

They gonna be coming to Dre for a drug test this week https://t.co/dMk8nxU9o5

How a random guy on Twitter who’s profile picture is a mirror selfie and who’s bio says ‘Free Yak’ goes viral like this where so many people believe him is wild, but it’s also the beauty of Twitter.