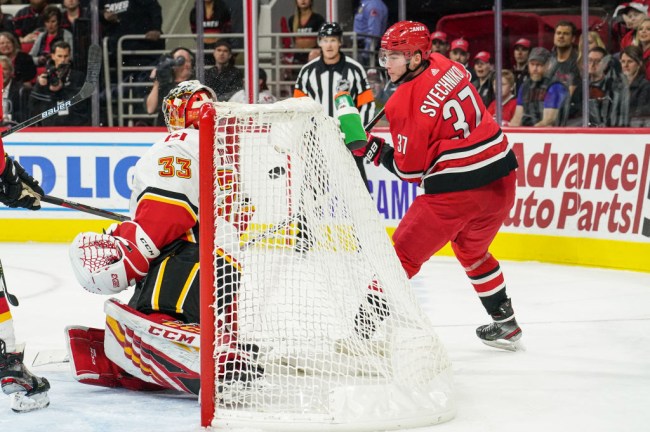 I’m going to assume most people reading this aren’t intimately familiar with the 1996 NCAA Division I Men’s Ice Hockey Tournament, but if you’re even a casual hockey fan, there’s a pretty solid chance you’ve seen what is easily the best highlight to come out of it.

During a game against Minnesota, Michigan’s Mike Legg found himself with the puck behind the Gophers’ goal and decided the best way to score was to pull the virtually unprecedented move of using his stick to lift the puck off of the ice and deposit it in the net.

It was a move that almost immediately went down in history, and since then, a number of players have managed to pull off similar stunts—including Mikael Granlund, who scored what many have dubbed a “lacrosse-style” goal at the 2011 World Championships.

However, coming into Tuesday, no one had ever pulled off the move in an NHL game but that all changed when history was made by Andrei Svechnikov.

The Hurricanes found themselves in fairly desperate need of a goal on Tuesday night after seeing themselves trailing by one against the Flames with around 10 minutes to go in the third period, but luckily for them, Andrei Svechnikov decided to remedy the problem by channeling his inner Legg and scoring what may be the filthiest goal you’ll see this season.

Svechnikov would score the game-winning goal just a few minutes later and rightfully take home the first star and bragging rights for life in addition to helping the Hurricanes take home two points.

If you need me, I’ll be in the shower because watching that made me feel dirty.