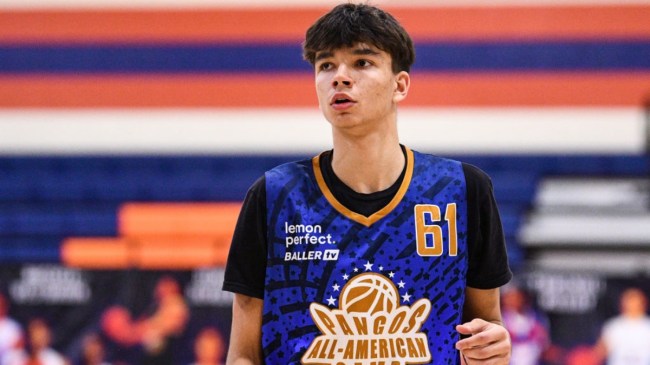 It has been a while since the Stanford basketball program has had much to celebrate. They haven’t been to the NCAA Tournament since the 2013=14 season and their last postseason success, winning the NIT, came the following year.

Now it looks like they could be on their way to turning things around as Stanford recently got a major win for their 2023 recruiting class.

Yesterday, Andrej Stojakovic, the son of former Sacramento Kings star Peja Stojakovic, revealed to 247 Sports that he would be joining Stanford next season.

The moment he made it official 🙌

According to 247 Sports, Stojakovic is the 17th ranked recruit in the Class of 2023 and the 4th ranked small forward. He had received interest from bigger programs, including offers from UCLA, Texas, and Oregon. However, he revealed that his decision was about more than just basketball.

I ultimately chose Stanford because in my eyes it wasn’t just the best basketball decision for me but it was also the best academic, long-term decision of the four. I believe in the whole program from top to bottom and the whole coaching staff and their philosophy.

Stojakovic joins Kanaan Carlyle, the 34th overall recruit in the class and the 9th ranked combo guard. With just these 2 signings, Stanford already has the 22nd ranked recruiting class in the nation for next season and they still have plenty of time to add more talent.

This could be just the spark Stanford needs to get their program headed back in the right direction after a few rough years for the trees.