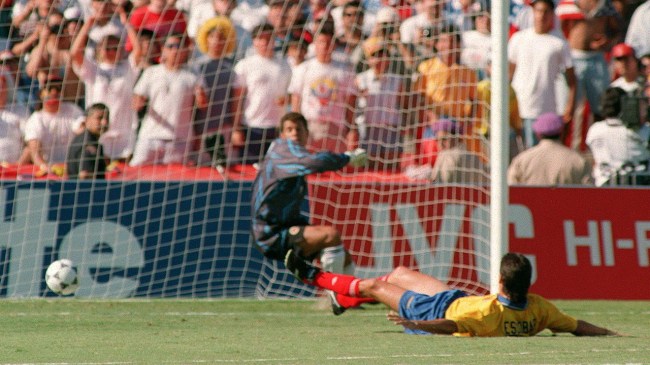 What makes sports so enthralling is the intensely human stories that propel them.

Michael Jordan’s mythical determination. Tom Brady’s legendary relentlessness. The Willis Reed injury game. Byron Leftwich being literally carried down the field. It is the raw emotion of our fellow man pushing themselves past their limits in an effort to achieve greatness that inspires us to remember these sporting moments for decades on end.

But, as with most things in life, there’s always a flip side to the coin. For every Isiah Thomas dropping 53 on his late sister’s birthday, there’s an Aaron Hernandez catching bodies. For every “Cleveland, this is for you”, there’s an “I have never used steroids, period”.

When it comes to the story of Andrés Escobar, his coin ultimately landed on the side of sport’s darkness.

A quarter of a century ago, the World Cup was being held in the United States of America for the very first time. Long considered to be a niche game in our country, the World Cup sparked a soccer fire that has been growing ever since, as venues as massive and sprawling as the Rose Bowl were sold out throughout the tournament.

And one of those sellouts was a June 22 match between the hosting United States and Colombia, who were in the midst of their footballing golden generation (a term in soccer used to describe a country’s best ever crop of talent).

Led by the likes of Escobar and Carlos Valderrama, Colombia went unbeaten in World Cup qualifying, leading to expectations of being one of the favorites to win the tournament.

But while their nation’s soccer team was in the midst of a golden generation, the country itself was toiling in anything but, as the constantly warring cartels led to Colombia having the world’s highest murder rate.

Yet, despite the devastation that drug lords were unleashing on their own people, the country was able to unite under the hope of their torrid national soccer team. Until June 22, 1994.

On June 22, 1994, in front of over 90,000 people, Andrés Escobar was retreating into his own penalty box as the United States launched a counter-attack in the 34th minute. Attempting to block a cross swung in by United States midfielder John Harkes, Escobar’s outstretched right leg accidentally ushered the ball into his own net for the game’s first goal.

Far from the most egregious own-goal you’ll ever see, anyone who’s ever played soccer — especially on defense — will tell you that Escobar’s options were limited. If he doesn’t desperately swing at it, the ball likely finds the feet of the American striker before being nestled into the back of the net.

The United States would eventually win the game by a score of 2-1.

And while the own-goal may not have been the most egregious ever scored, it was certainly the most consequential, as it cost Colombia the game and Escobar — one of the most beloved players in the nation’s history — his life.

On July 2, 1994 — just days after the Colombians were eliminated from the World Cup in the group stage — Escobar was shot and killed by two men in his hometown of Medellín. The 27-year-old was believed to be murdered as retribution for the game-deciding own-goal. Days after that, his funeral was attended by more than 120,000 people.

And to this day — 25 years after his death — the ever-passionate Colombian football fans still proudly brandish his photograph at games.

“We’ll see each other again soon because life does not end here.” – Andrés Escobar

For more about the life and death of Andrés Escobar, check out the incredible ESPN 30 For 30 documentary ‘The Two Escobars’.