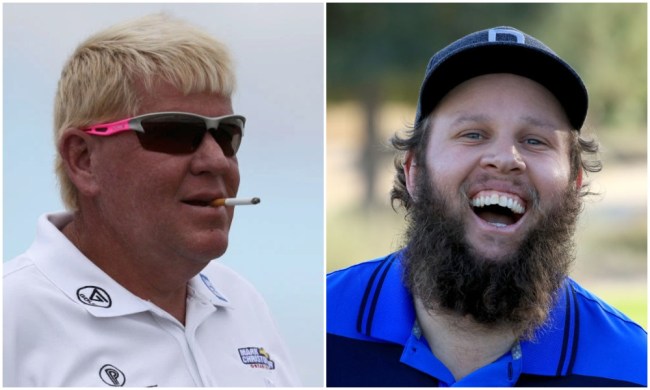 John Daly likes to have a good time, we all know this. It’s no secret that the two-time major champion likes to indulge in some ice-cold beverages every once and a while, it’s part of the reason so many people love the man.

Just when you think that you’ve heard just about every legendary story involving Big John, another one comes out of nowhere. This one comes from Andrew ‘Beef’ Johnston, a European Tour winner and good pal of Daly’s.

Johnston appeared on Sirius XM PGA Tour Radio and explained the particularly wild night that came following the final round of the 2015 Turkish Airlines Open. When in Turkey, ya know?

It all started with a  few beers, then that turned into ordering two whiskeys at a time and before Johnston knew it he was half-naked ready to jump into one of the swimming pools. A few cold beers followed by the brown stuff will get you.

.@BeefGolf and @PGA_JohnDaly have been good friends for a long time. When did they start to really bond?

He told @bcrowellpro, @Fdarbs, and Taylor Zarzour that it began with one LONG night in Turkey 🍻🥃🥃 pic.twitter.com/UTNSnXfKXE

What a sight it would have been to have seen Daly with a whiskey in one hand and cigarette in the other just laughing his ass off while Johnston was making a fool of himself in his underwear.

Probably the coolest part of the Johnston’s story is the relationship the two have built following that night. Everyone knows that a drunken night in Western Asia is a true recipe for a great friendship. Johnston says that Daly is always there for him to talk to when it comes to just about anything and is always willing to help out with things.

Johnston is a bit of a legend himself, especially over in Europe with a loyal fanbase and this story will only add more flame to that fire.