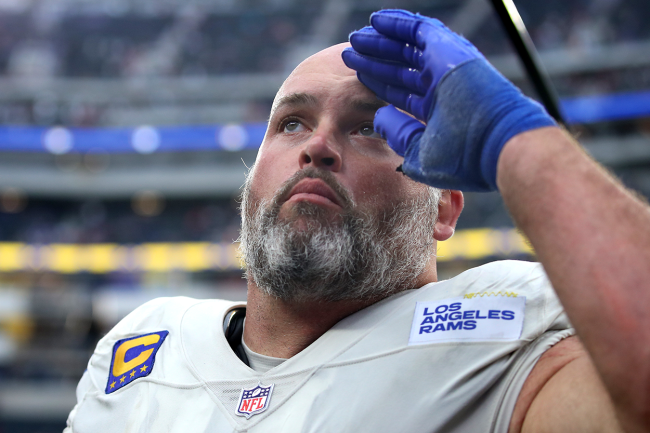 During the week leading up to the Super Bowl, the NFL holds its annual awards show and hands out the top honors from the season prior. At the end of the day, MVP, Coach of the Year, Comeback Player of the Year and most of the awards are subjective and fairly meaningless in the grand scheme of things.

There is one award, however, that is more than just numbers or on-field play. The NFL’s most prestigious award is the Walter Payton Man of the Year.

The award recognizes a player for his “outstanding community service activities off the field, as well as excellence on it.” Every team nominates one player, but only one of the 32 nominees can win.

This year, it was awarded to Los Angeles Rams lineman Andrew Whitworth. He is the oldest player in the NFL at 40 years old, the first lineman to win the award since 2011 and the first Ram to ever win the award. It was well deserved.

Whitworth launched the Big Whit Homes for L.A. Families program at the beginning of the year and donated $20,000 after each Los Angeles home game. He also donated for home repair in his home state of Louisiana and moved Angelenos who were facing housing insecurity into affordable homes.

And that’s not all. He also works with non-profits in L.A. to help people in paying their rent, buying groceries and offering support for down payments and the furnishing of a home.

He is a phenomenal person and will forever be a Walter Payton Man of the Year.

For winning the award, Whitworth receives a donation to the charity of his choice. He also had the opportunity to give a speech about his work and what it means to receive the honor.

It was emotional and it will move you to tears. Whitworth

“Keep investing in each other. And lead with your heart.”@RamsNFL OT Andrew Whitworth delivers a moving #WPMOY acceptance speech. (by @Nationwide) pic.twitter.com/Y3GWKnNx1s

In a world full of drama, hate, and division, be an Andrew Whitworth. His speech on Thursday night was powerful. One quote in particular stood out:

“You will never regret making something about more than yourself.”

“Wow. What a special moment for me and my family. I want to start by thanking my wife Melissa. I don’t know where she’s sitting, but I wouldn’t be up here without her passion for community service and support she’s always given me. Melissa and I have always believed that community service starts in our home. It starts with our own kids, because the best lessons we can give them is for them to learn from their mom and dad. What it means to try. To fail. To regroup. And grow from the process.

I also want to thank Molly Higgins and the Los Angeles Rams organization. Their commitment to the community is nothing short of greatness. It’s unbelievable. It’s one of the most special things I’ve been around. A team that truly believes in community effort.

This award, though, has been about players who are great on the football field but live with their hearts off of it. They made their time in the NFL about more than just the stats out on the field, but how they lived off of it. I’m humbled. I’m honored to stand up here and represent the outstanding class of 2021 nominees and all the previous winners. Give them a round of applause.

But I’m here to tell you, we have more work to do.

Social media has been great for bringing awareness to all of our causes. But that’s not enough. We need more action. Whether we choose to acknowledge it or not, the people who come to see us play, who watch our game on TV, who buy our jerseys, who follow you on social media, they’re why our game exists. That’s why we have a field to play on.

We are financially supported and provided the opportunity to play a kid’s game because of the support we receive from communities across this country and across the world. But how are we supporting back? In what ways are we paying it forward to the same communities we all grew up in, we all came from. Or maybe the people that we’ve seen struggling along the way, we got to where we are.

It can be as simple as making a kid smile by walking in a school and telling them you love them and you believe in them. And they can achieve anything they want. Or maybe it’s stepping up financially and saying, ‘I’m going to ensure that every child has the same opportunity in education regardless of what their ZIP code is or what state they live in.’ Or maybe it’s using your platform to make sure local government and officials are always creating programs and funding to have youth, having an equal playing field, and the ability to chase every dream they ever have.

You can apply those three things to any charity or cause you have a passion for. You can invest your time. You can invest your finances. Or you can invest your voice. Doesn’t matter which. We just have to keep investing in each other. Let your heart lead you all the way. I’ve had so many amazing experiences serving the community. Watching that video really brought tears to my eyes and it warmed my heart just watching people smile, watching kids just enjoy life and remembering what that was like.

Going on school visits, providing STEM labs, hospital visits, programs for military or just going to local food banks and helping out with homeless shelters, all of those have been amazing.

But one experience brought it all together for me.

This year. And it happened on a football field.

In our game against the Detroit Lions, I had a young player from the Lions run up to me as soon as the final horn went off. And I saw him sprinting over and I didn’t know what was going on. Like we’d known each other forever. I couldn’t place him. It made me so nervous. Had I actually played long enough that a coach’s son or player’s son is playing against me?

He stopped that. He said, ‘Hey, man. You’re not gonna remember me. I’m Derrick Barnes. You spent time with me when you were a young player in Cincinnati at the Boys and Girls Club. And it meant the world to me. You used to sit with me and talk to me about life and I was just a little kid. I wanted you to know how much it meant to me.

I said, ‘Man.’ He goes, ‘You know what? The main thing I wanted to say, Whit, I made it. I made it to the NFL, Big Whit.’ Wow. I was floored for how special that was. But I told tell that story to say I did anything special. I hope you don’t see that video and you think there’s anything special about me. But I hope that you see it and you think this.

On that Tuesday off day, when every guy sitting in this room played knows, I’d rather be at home. I made an investment in him. And I didn’t even know it. I think that’s a great lesson for all of us. None of us know when the moment’s gonna present itself. The key is to always be available when it does.

So keep investing, lead with your heart, and I can’t wait to watch the legacy continue. Because remember this—

It’s a blessing, not a burden, to carry on this NFL legacy.”